Helsinki, Finland is a vibrant seaside city of beautiful islands and an amazing skyline. This well rounded city has much to offer its visitors no matter what time of the year you visit. With a concentration of attractions it is a true walking city paradise.

With its cool temperatures, we suggest visiting between May and September, unless you are looking for its picturesque snowscapes.

We were also lucky enough to sleep in the Stadion Hostel which was in Helsinki’s Olympic Stadium. Unfortunately, with the end of our stay came the end of the hostel, as the stadium is undergoing permanent renovations.

The best things to do in Helsinki walking map:

The best things to do in Helsinki in 2 days: 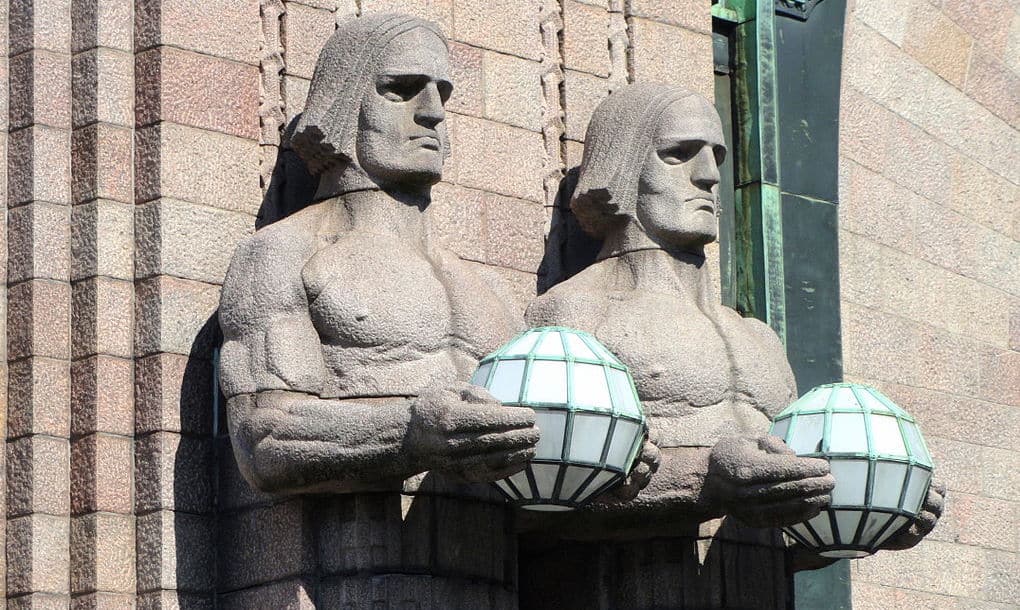 Coming from the airport, our first stop in the city is the Helsinki Central Railway Station. It is one of the more beautiful stations we have gone through, both inside and its facade. The main entrance is flanked by two pairs of massive male statues holding lamps; quite impressive to say the least.

We then walked to Finlandia Hall, a majestic piece of modern architecture. While it is just a conference building, it is worth it for the photograph.

Across the street is the National Museum of Finland. The museum covers Finnish history from medieval times to the 19th century. The museum is open Tuesday to Sunday from 11AM to 6PM. Tickets cost €10 for adults, but admission is free Fridays from 4PM to 6PM.

Outside the museum is a small garden with an interesting tree sculpture which is not to be missed!

We then walked to the Finnish National Opera house. There are some small interesting art installations outside the building, including a nice entryway, which makes for a great photo frame.

If you have spare time in the evening you can come back for a spectacular opera or ballet performance. 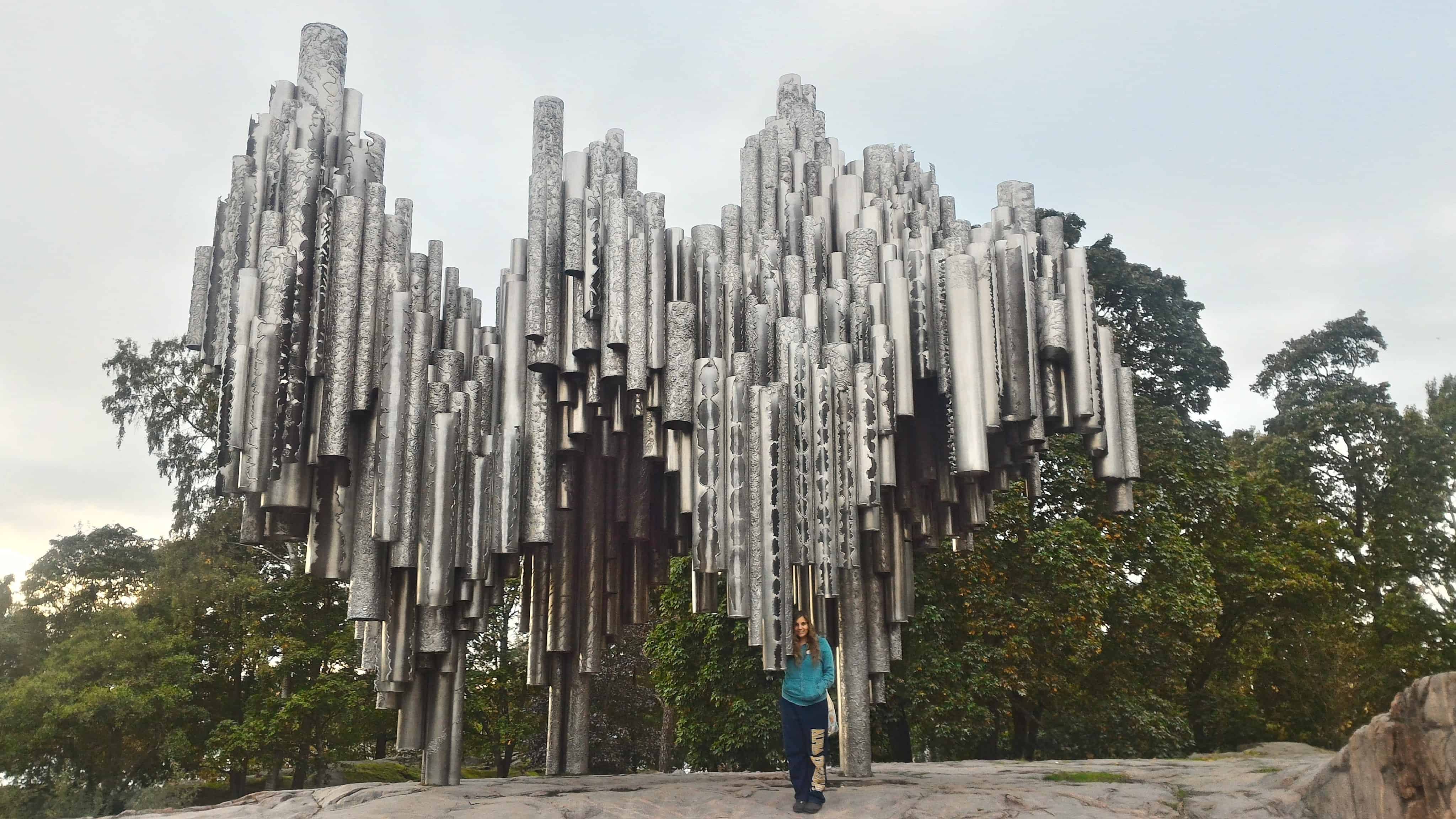 We then walked onwards to the iconic Sibelius Monument, right by the water. The abstract sculpture is composed of 600+ steel pipes forming a wave-like shape representing music. The monument is located in a beautiful park as well, with plenty of places to get off your feet and relax.

Heading back towards downtown, we walked through the Hesperian Esplanadi, a beautiful tree lined park with several intriguing sculptures along the route. 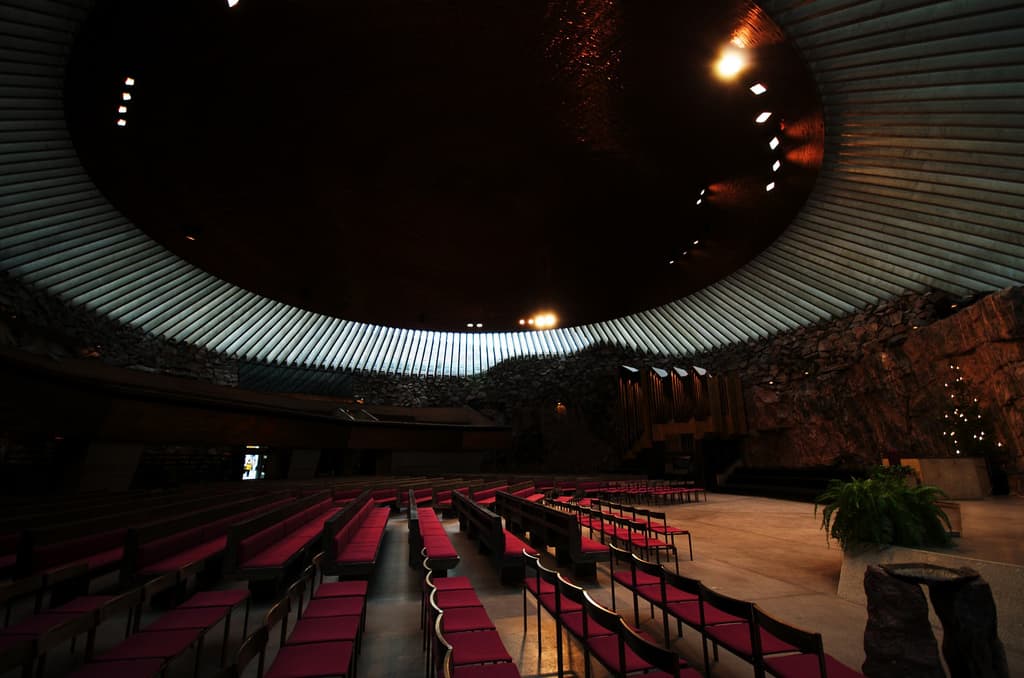 Our next stop is the famous Temppeliaukio Church, also known as the Church of the Rock. The church is built directly out of solid rock making for a one of a kind interior. Only the dome roof is sticking up above ground, making it almost unnoticeable from the surrounding neighborhood. As one of the main attractions of Helsinki, the church is always bustling with tourists.

We then walked south to Narinkka Square, one of the busiest squares in the city. Around the square there are many places to eat, and a vast mall on one side. At the center of the square is an egg shaped Enterpreneurs Monument. 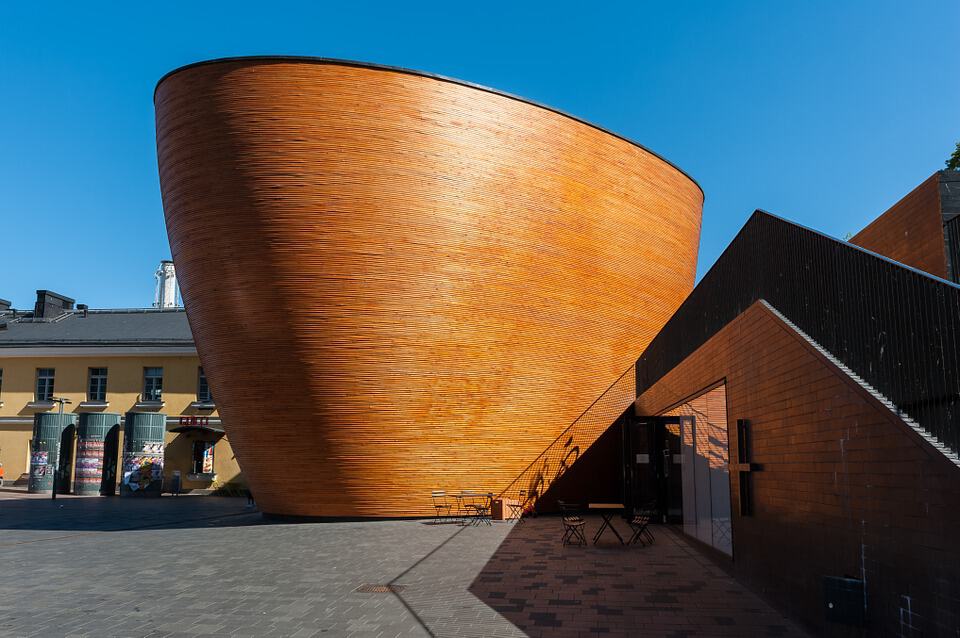 At the edge of Narinkka Square is the Kamppi Chapel. Its beautiful modern architecture is meant to serve as a “Chapel of Silence” in the busy square. The unique design makes for an inspiring monument for everyone to enjoy.

We then walked to the Old Market Hall. The beautiful hall opened in 1903, and now serves endless supplies of local and foreign delicacies at 25 different merchant stalls.

Across the harbor is the Finnair Skywheel. This Observation Wheel that provides a panoramic view of the heart of Helsinki and its surroundings. It provides the best views in the entire city. 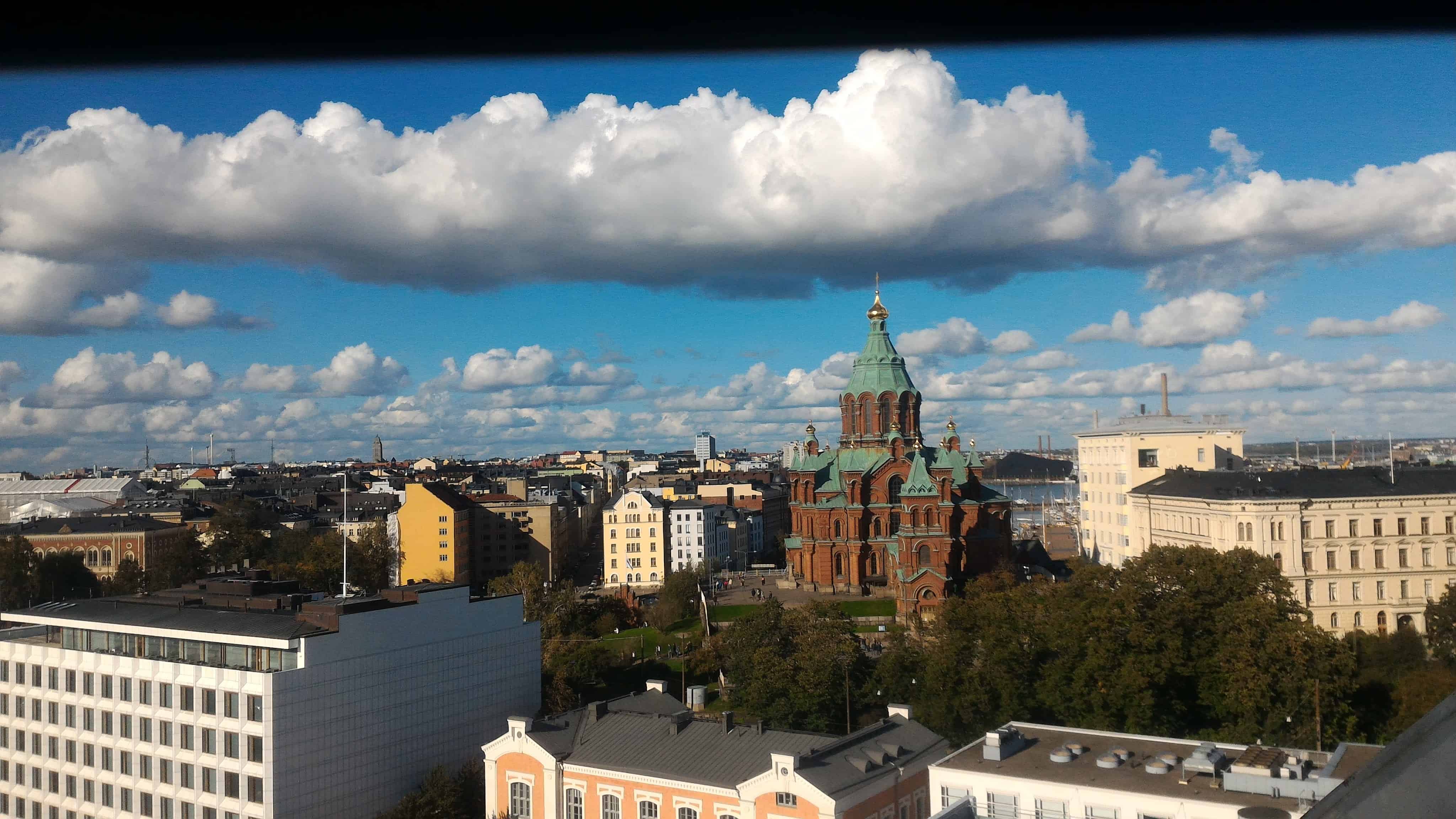 Just up the hill from the Skywheel is the the grand Uspenski Cathedral. Its golden cupolas and blue roof shimmer in the bright Helsinki sun. Make sure not to miss the ornate interior! 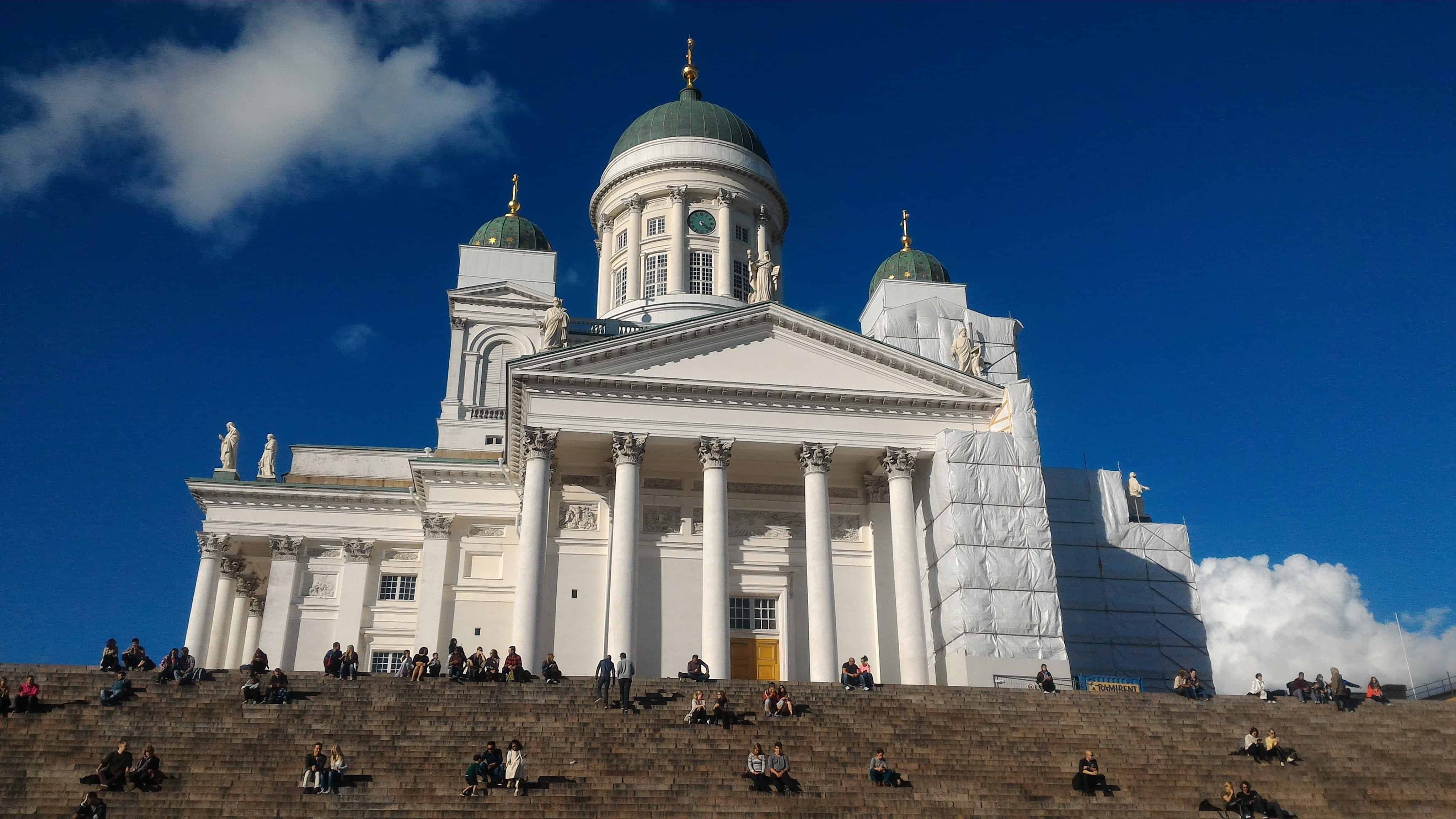 We then started to walk back towards the Railway Station to Senate Square. The buildings surrounding the square make up all different aspects of life in Helsinki. The main buildings are:

Our last stop is right next to where we started, at Railway Square. If you are lucky enough you might run into the many fairs, festivals and events that take place here. It is also has beautiful Finnish National Theatre at the top of the square. 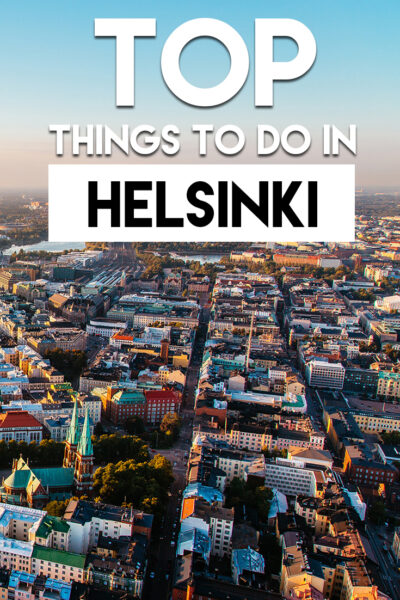 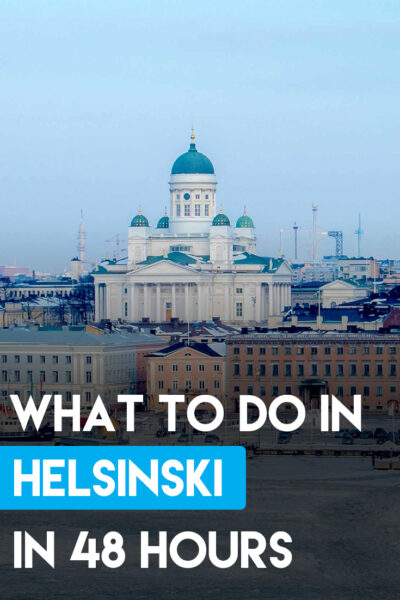