The best way to explore the city of Boston and its history is to follow the Freedom Trail. This route is not only the most popular tourist attraction in Boston, but it is also an excellent way to see how the city developed throughout the years. This 2.5 mile walking route marked by a red brick path, passes many locations significant in the history of the United States and its independence.

Walking along the Freedom Trail is free but you could also join a tour, where they will explain in more detail the history of it. To bes honest, I think it is good either way, but if you are on a budget you should be fine with this complete guide. Some of the locations charge an entrance fee: The Old State House, Old South Meeting House, Paul Revere House, Old North Church and the King’s Chapel. The trail was created in 1951 and now boasts over 4 million walkers a year, so expect some company.

➳ Find all: Hotels in Boston

While there are only 16 official stops along the Freedom Trail, there are several other places along the route worth visiting, so make sure to read this post completely, to not miss all that Boston has to offer! Among the most important sites of interest is the Old South Meeting House, the Old State House and the Faneuil Hall.

Our tour starts at the Boston Common park and ends at the frigate USS Constitution. Although you could start the journey from any of the landmarks, it is always good to start from the beginning.

Boston has hundred of different types of accomodations for every single kind of travelers from backpackers to luxurious guests. Check out this list of the best accomodations in Boston.

The best way to save money is buying te Go Boston City Pass Card. The Go Boston Card is a tourist sightseeing pass with free access to over 41 attractions in Boston, including the Fenway Park and the Skywalk Observatory. A must when you visit Boston!

The top 10 attractions included in the pass are:

If you are planning on staying in Boston for more than one day or more it might be a good idea to buy the Boston pass. You can buy this card here.

Video of our walk along the Freedom Trail in Boston:

The Freedom Trail is a highlight for any 2 days in Boston itinerary, but make sure to check out the other attractions this beautiful city has to offer.

This map highlights all of the sights on the Freedom Trail and the other spots we think you should visit while you are doing it.

The Boston Public Garden was established in 1837 as the first public botanical garden in America. It is now most notable for its Make Way for Ducklings statues. During the warmer months this is where you can take a ride on the Swan Boats.

For any Cheers fans out there, visiting the Cheers restaurant is a must. You will recognize the outside view from the show, and the upstairs bar has been rebuilt as a replica from the show’s set. There is no other bar in the world where everybody knows your name.

Just across the street is the Boston Common, created in 1634 as America’s first public park! It has gone through many changes and seen many important events since its creation as a public grazing area. In the winter, get your skates ready for ice skating on Frog Pond.

The Park Street Church has a beautiful 217 ft. steeple right on the corner of Boston Common. This church served as a focal point for supporting Abolitionist causes in its early days and is still involved in important social issues to this day.

Adjacent to the church is the Granary Burying Ground. This is the final resting site of many Revolutionary War-era patriots, including Paul Revere, Samuel Adams and John Hancock.

The King’s Chapel began in 1686, but the current stone building was completed in 1754. The chapel is also home to the last and largest bell ever made by Paul Revere, which still rings to this day.

Adjacent to the church is the Burying Ground, which served as Boston’s first burial site and only one from 1630-1660.

The next stop is two in one.The building you will see is the Old City Hall, home to the Boston city council from 1865 to 1969. In front is a statue of Benjamin Franklin, Boston’s first public statue of a person, which actually predates the building by over 20 years.

This is also the former location of the Boston Latin School, the first public school in the United States. There is now a plaque on the sidewalk commemorating the site. 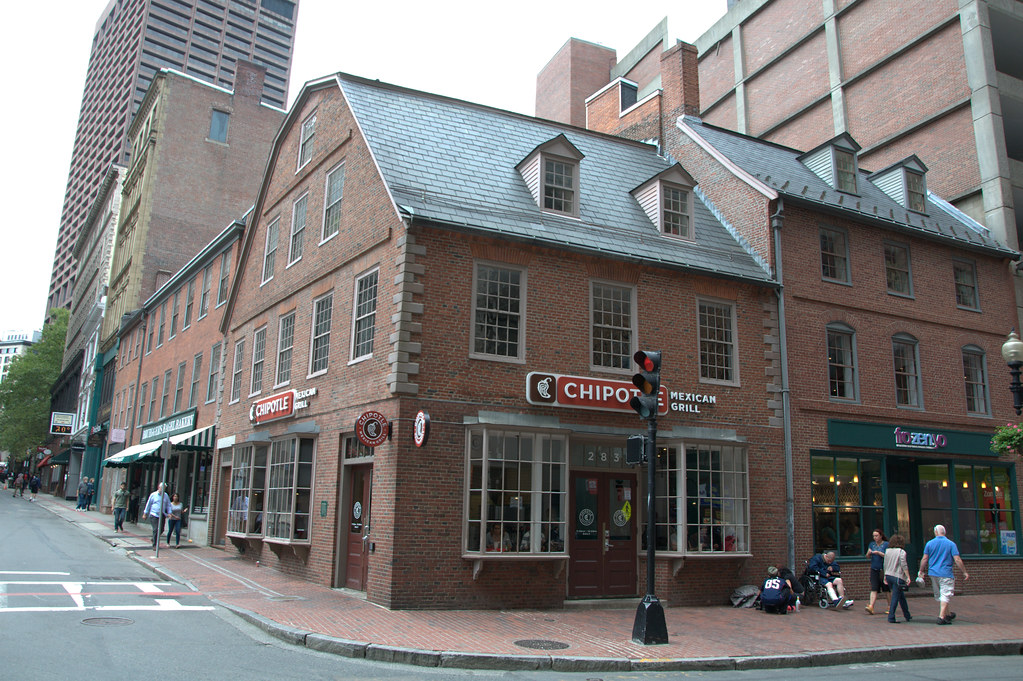 The Old Corner Bookstore is no more a quick photo, unless you want a burrito from the Chipotles that now occupies the space. At its height in the 19th century, the Old Corner Bookstore brought in regulars including Ralph Waldo Emerson, Henry David Thoreau, Nathaniel Hawthorne, Charles Dickens, Mark Twain, Henry Wadsworth Longfellow and Harriett Beecher Stowe.

Across the street is the Old South Meeting House, most notable for it being the organizing point for the Boston Tea Party. The building is now a museum and an active gathering place for discussion and free speech.

The Old State House is the oldest surviving public building in Boston, built in 1713. It is now a museum with a collection of Revolution-era artifacts that tells a small portion of the history of the revolution in Boston.

At the steps of the old State House is the site of the Boston Massacre, when five protesters were killed by the British Army on March 5, 1770. It was used as propaganda to help fuel the American Revolution.

Just a block away is Faneuil Hall, which has served as a marketplace and a meeting hall since 1743. Inside are several shops along with a museum on the third floor.

Through the back doors of Faneuil Hall is Quincy Market. It was built in 1825 as an expansion of the full Faneuil Hall. This long building is filled with food stalls as a hallmark location to try local flavors.

Adjacent to Faneuil Hall is the New England Holocaust Memorial. These six glass towers represent the six major extermination camp, the menorah candles and the six million Jews killed in the Holocaust. Take a moment to reflect on the impact of bigotry and evil throughout history and today. 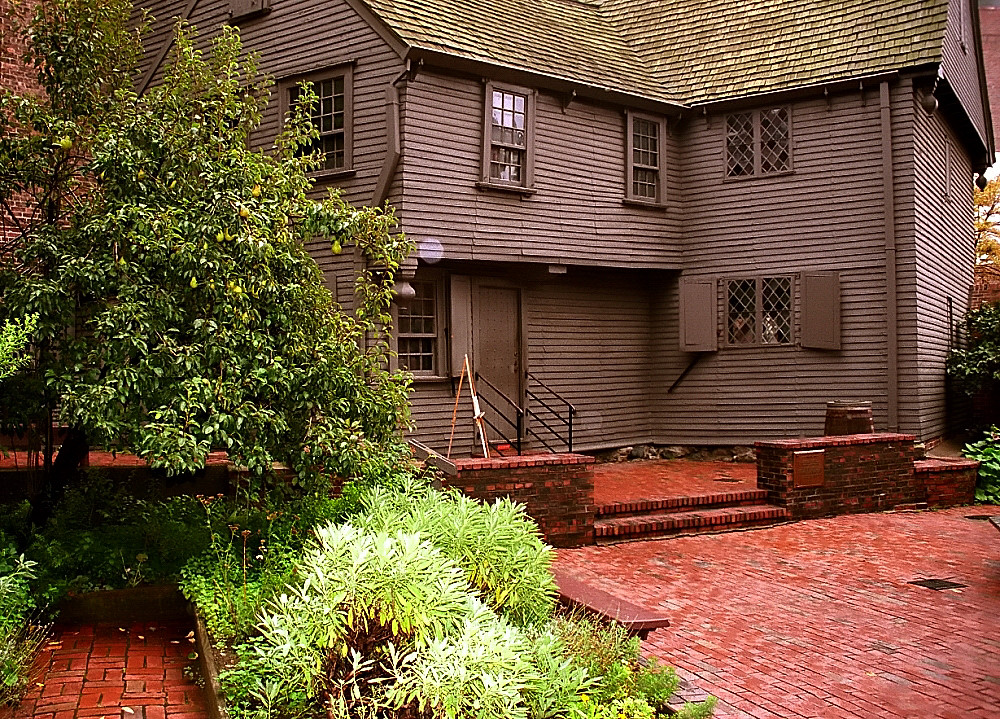 The Paul Revere House is the oldest remaining structure in Boston, built around 1680. This is where Paul Revere lived during the American Revolution. While it underwent many changes after Revere moved, it has since been restored to his time, giving a glimpse into the colonial life.

Little did you know, you are going to be walking past the best cannoli in Boston, from Mike’s Pastry! Located in the heart of Boston’s Little Italy, this pastry shop has everything you need for lunch, dinner or a delicious snack.

Note: The store only accepts cash, so make sure to hit up an ATM before getting here.

You might have learned Longfellow’s famous line “One, if by land, and two, if by sea.” Well, the Old North Church is where these two lanterns hung to warn the militia of the impending movements to the city of Concord. Make sure to take a quick tour inside the church to see where the Revolution began.

The last stop before crossing Charles River is the Copp’s Hill Burying Ground, the second cemetery of Boston. One of the more famous laid to rest here is Cotton Mather, who was a main supporter of the Salem Witch Trials.

Walking across the Charlestown Bridge, the next stop is the USS Constitution, the oldest commissioned warship afloat in the world. Climb aboard with a free tour provided by an active Navy member.

The last stop of The Freedom Trail is Bunker Hill Monument. It was built in memory of the bloody Battle of Bunker Hill, where the newly formed colonial army was able to cause significant damage to the British forces. Also, where these infamous words were uttered: “don’t fire until you see the whites of their eyes!”

Make sure to time your walk through Boston correctly, as the last time you can start climbing the monument is 4:30 p.m. This is perfect in the spring or fall to get the start of the sunset with a panoramic view of the city.

To help you on your self-guided tour of the Freedom Trail in Boston we have put together a list of things you must know before heading on your new adventure.

⇟ More articles from Boston that might interest you:

➳ Read More: Top 10 activities to enjoy in Boston in the Winter

4 of us will likely do the self guided walking tour…part in afternoon of 10-15 and more on 10-16. We will stay in a place about 20 minutes away. Any parking suggestions? We have walked some of this before while on a cruise…very rushed. Want to slow down this time.

Finding a parking spot in Boston can be an adventure of its own, especially during the work week. On a lucky day it can take 5 minutes to find a spot, but I have also spent an hour driving in circles when Jazmin had an appointment downtown. If possible we always recommend to use the T when possible around Boston and many T stations have parking at a much better daily rate. Parking meters in Boston are $2+ per hour and normally only allow 2 hours of parking. If you are going to be paying for parking all day, I would also check out ride-sharing like Uber to see if it is a similar price and allows you to end in a different part of town than you started.

I love your pictures (your photography is really amazing)! I really miss Boston after reading this post (especially lobster in Quincy Market)! This brought back so many memories!

Thank you so much! Boston is awaiting your visit!