For any Game of Thrones fans out there, you will recognize the historic city of Dubrovnik, Croatia as King’s Landing. The rest of us have never seen the show and want to explore the primarily intact 16th century city walls and all its beauty within.

Dubrovnik is located in southern Croatia and easily accessible by boat, bus or plane. The most cost effective way to get there from within Croatia is by boat or bus. If you do take the bus, be aware you have to drive through Bosnia for 20 minutes, crossing through border control!

➳ Find all: Hotels in Dubrovnik

While our walking guide comes in at under 2km, it does not take into account walking the old city walls. If you do chose to walk the walls completely, it is the entire circumference of the old town. However, you can still easily explore the entire historic town in one day.

What to do in Dubrovnik in 2 days Travel Video:

The best things to do in Dubrovnik in 48 hours walking map:

16 Amazing Things To Do In Dubrovnik, Croatia in 2 Days: 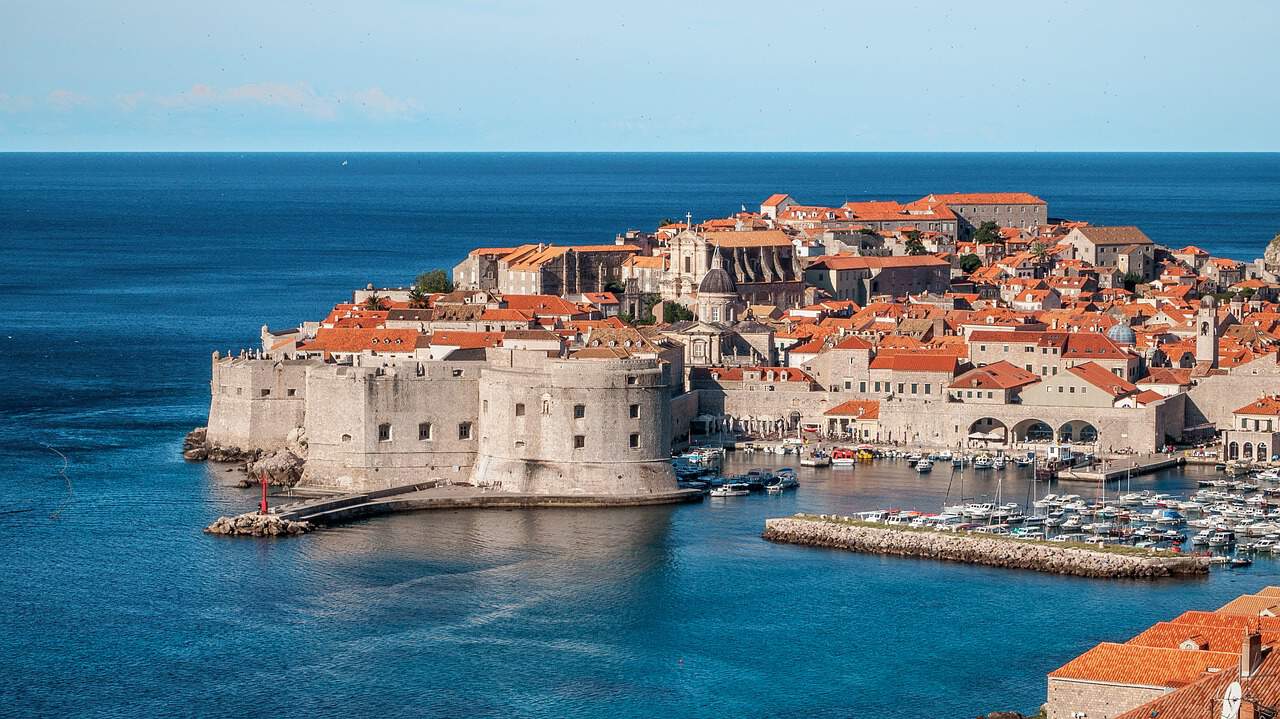 The old city walls are arguably the most famous part of Dubrovnik. These 16th-century walls remain primarily intact thanks to their impeccable construction, consistent care and the city’s ability to avoid conflict over the centuries. Walk atop the walls around the entire city for views from every direction, both into the city and of its beautiful surroundings.

The walls are open from 8 AM to 6:30 PM and tickets cost 150 kuna/person. The saying has it, if you haven’t walked the walls, you have not seen Dubrovnik!

15. Take a stroll on Stradun Street 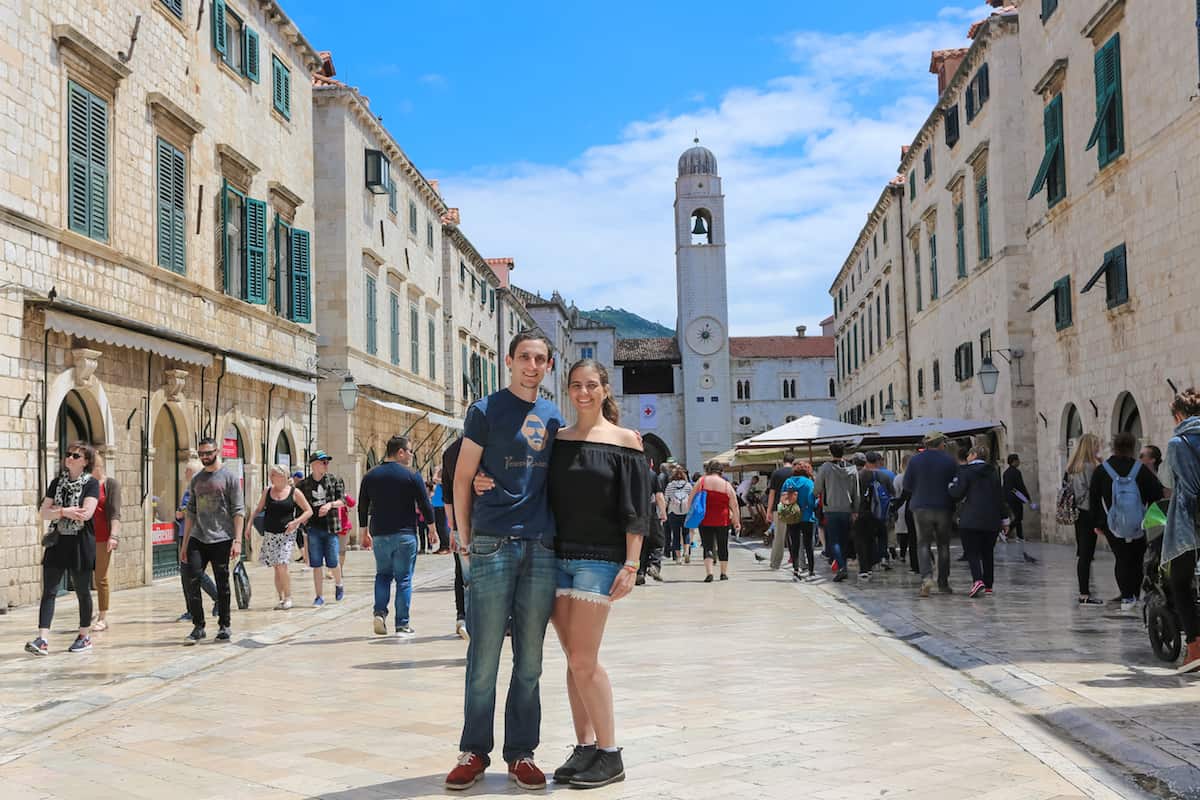 To walk across the small city center of Dubrovnik Old Town your walk will most likely start with a walk down the Stradun Street, a famed limestone paved avenue and pedestrian zone running for just over 300 meters across the entire walled city.  Interestingly, Stradun street follows the line of the channel that once divided town into two parts and today is a home to beautiful stone houses, churches, museums as well as it is hiding one of the oldest synagogues and pharmacies in this part of the world. 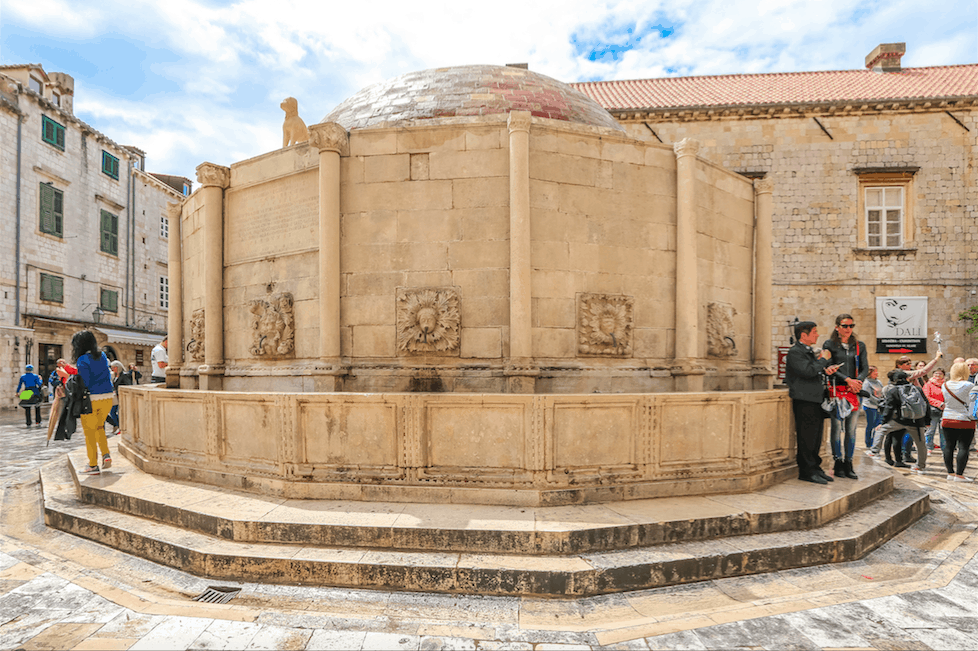 In case you have started your walk down the Stradun Street from the main western entrance to the Old Town, the Pile Gate, the first point of interest should be Big Onofrio’s Fountain. It is a 16-sided fountain with drinkable water in case you find your water bottle empty.  The water is brought from a well 20 kilometers from the actual fountain making this construction a masterpiece of the time when it was built, 570 years ago.

Across the Big Onofrio’s Fountain, and to the right side of Stradun, you will find the Franciscan monastery hiding the third oldest pharmacy in Europe still in use. Apart from being famous for its pharmacy and the museum, the monasteries’ cluster is considered a masterpiece of architecture and is a great place where you can usually hide from all the noise at Stradun and catch some nice shade.

Tickets cost 30 kuna. Summer hours are Monday to Sunday from 8AM to 6PM and Winter hours are from 9AM to 4 PM

12. Take a photo of the Orlando’s column 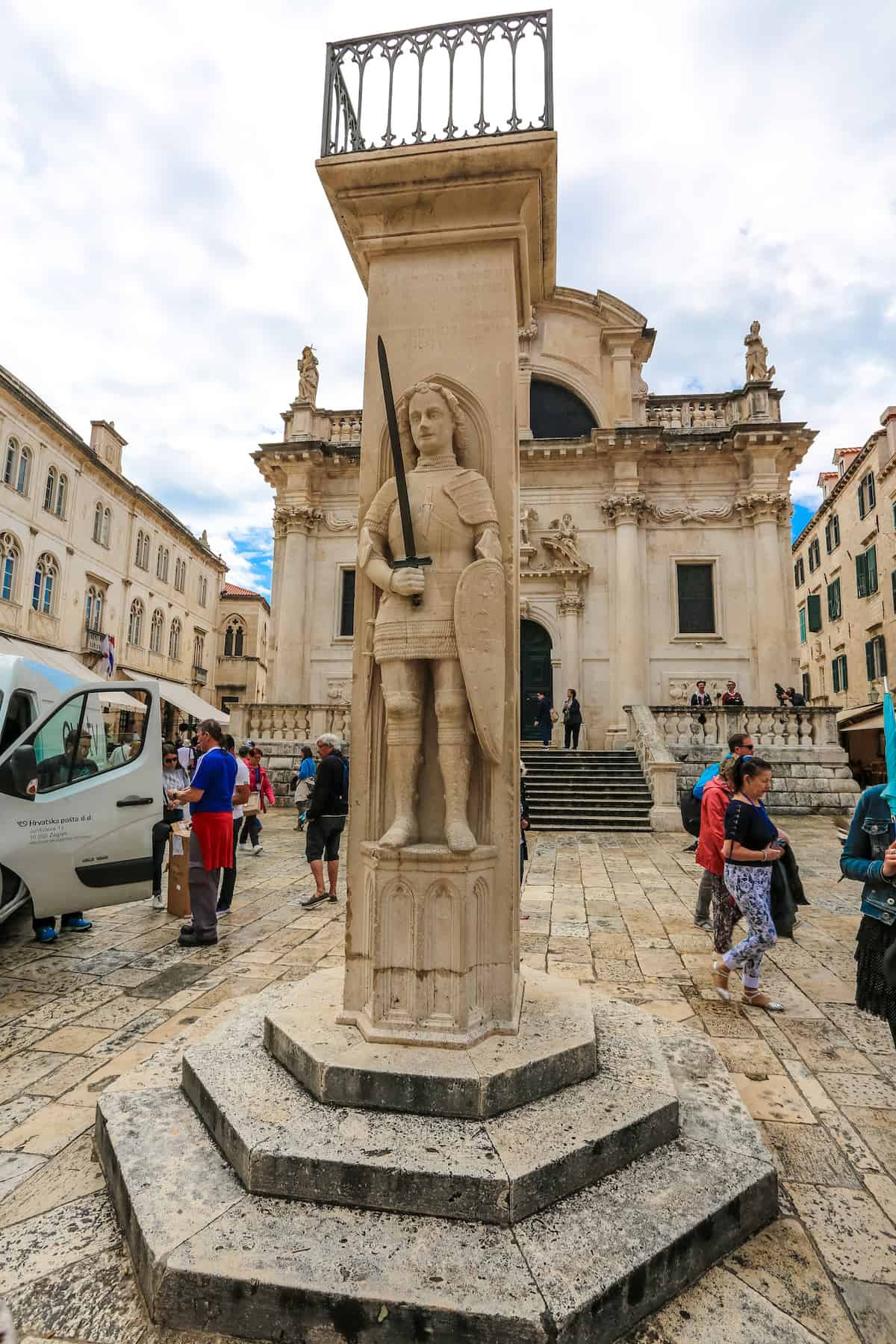 Walking to the eastern side of the city brings you to a column of Orlando, a knight who according to a legend saved the city from the Saracens.  The state decrees were proclaimed and punishments were also executed here. Once next to the column, pay attention to the knight’s forearm as the forearm of Orlando was the standard measure of the Ragusan cubit, lakat, shown more accurately by a line in the base of the column.

11. Go inside the St. Blaise Church 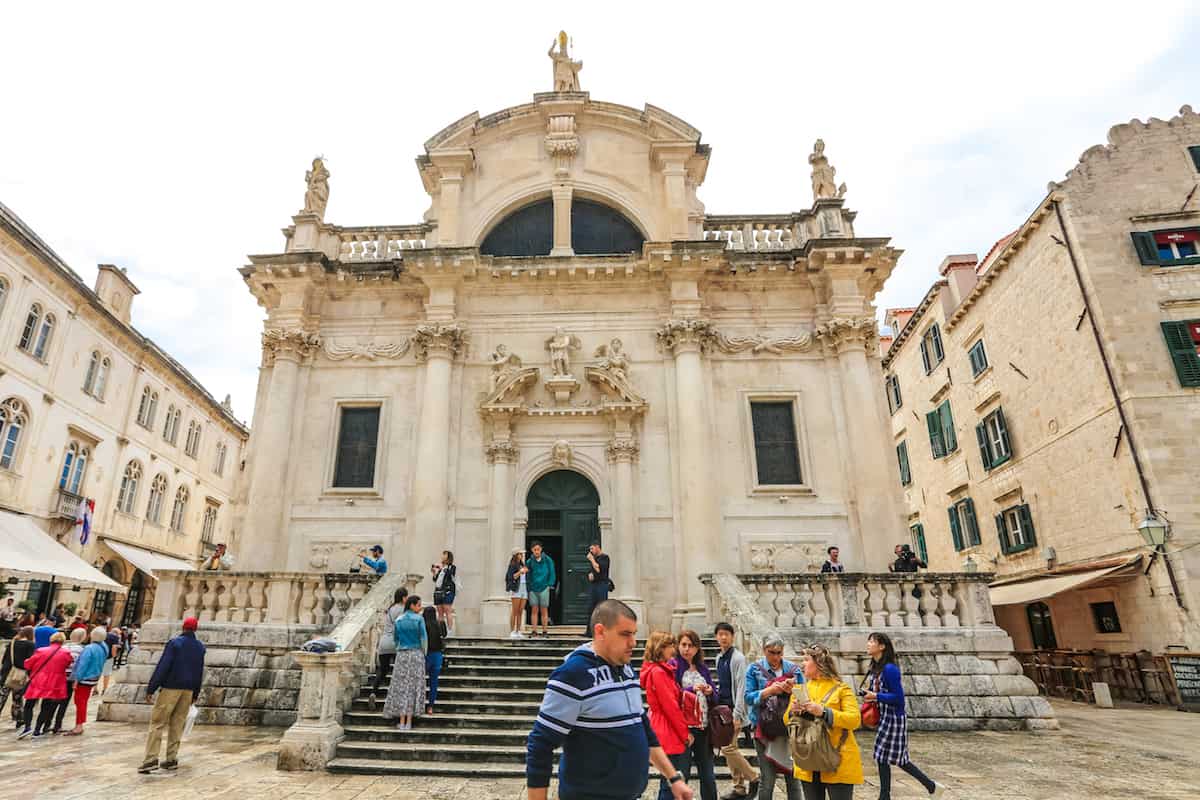 On the right side of Orlando’s column stands St. Blaise church named after the patron and protector of Dubrovnik celebrated each year on February 3. On the wide staircase of the church, you can sit and soak in all the beauty of this amazing city before continuing your walk. 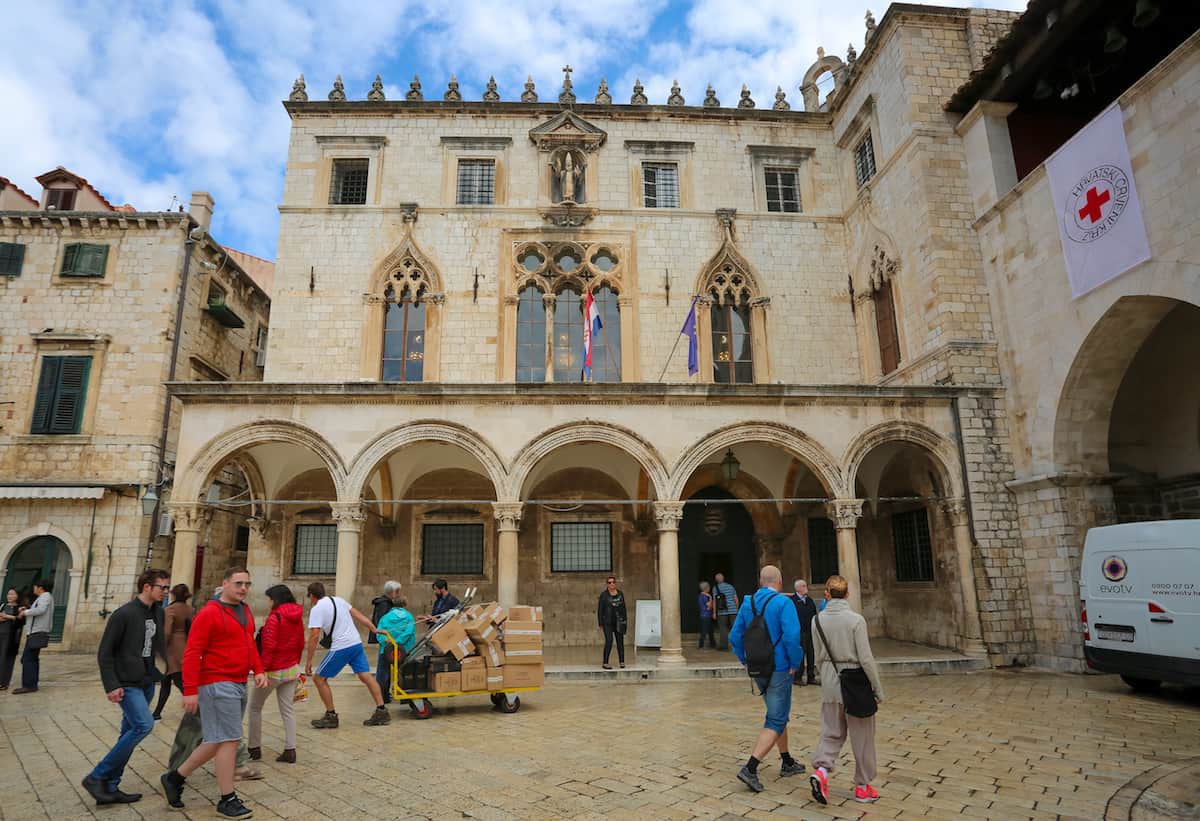 On the left from Orlando’s column is Palace Sponza.  Throughout history, the palace was used as a customs house, a mint, and main warehouse. On one of the arches, as a reminder of the days when it was used as a customs house, you can find inscribed the Latin saying: ‘Our weights do not permit cheating or being cheated. When I measure the commodities the Lord measures with me.’ Today, the ground floor houses historic archives,  exhibitions, festival concerts, and contains the original 16th-century mechanism controlling the town bell and clock.

9. Take a photo of the Bell Tower and Bell Lounge 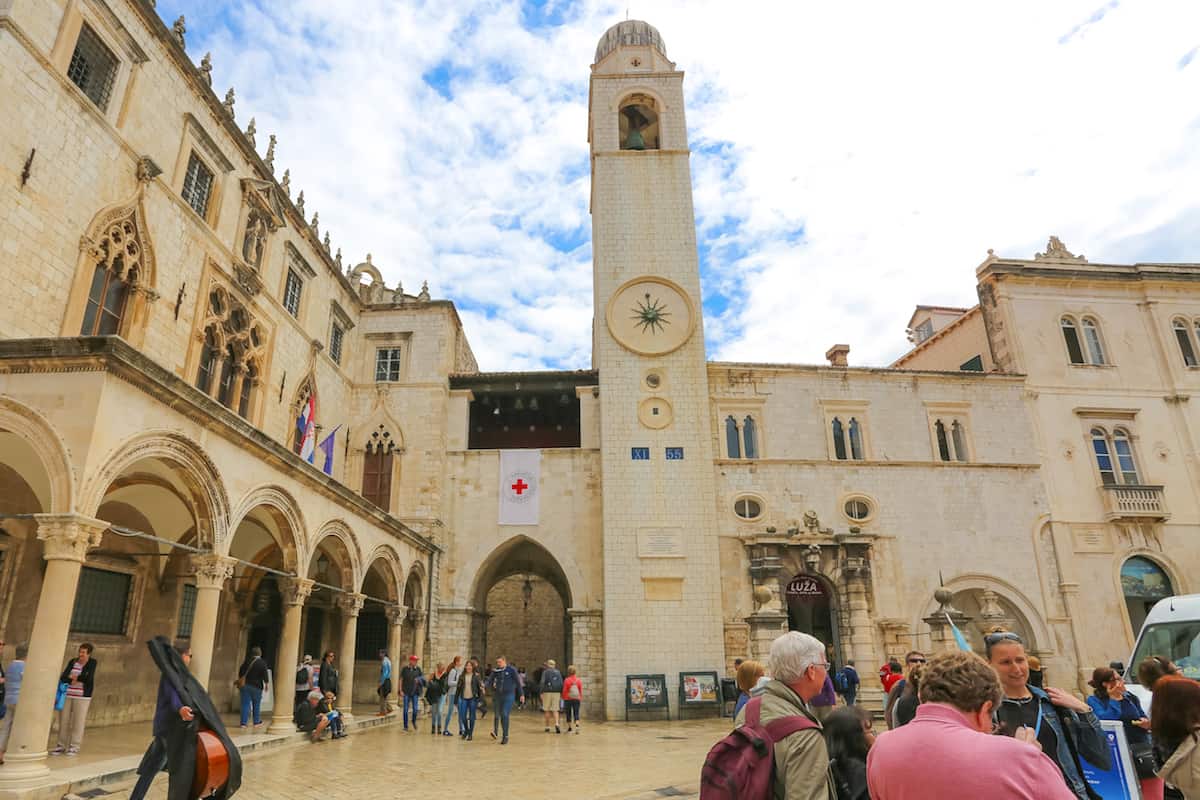 The elegant bell tower, 35m tall dating from 1444. is connected to Palace Sponza. On St. Blaise Day, in the bell lounge, an area connecting the Bell Tower and Palace Sponza, a lottery is held when a man in charge is reading the numbers while citizens throw different vegetables and fruit at him. Sounds like a lot of fun!

It is not possible to get inside of the Bell Tower and Bell Lounge, you can only enjoy the view at them from Stradun. 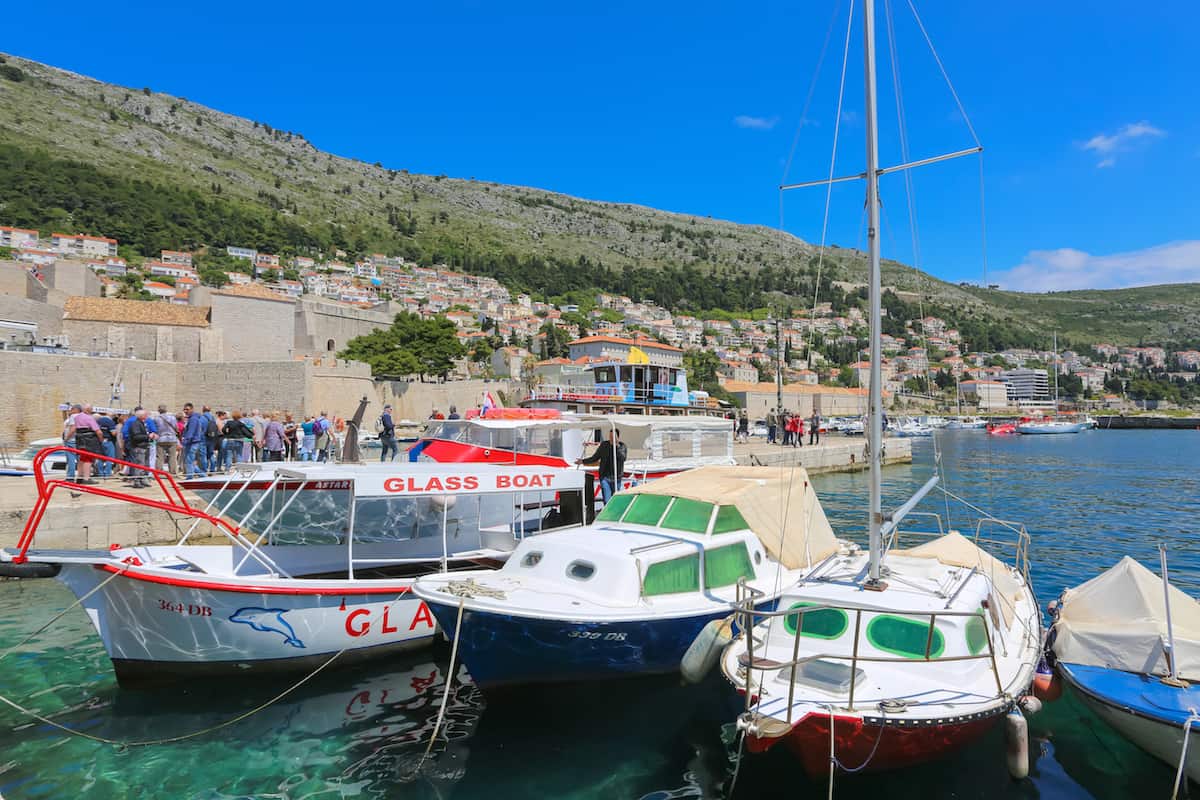 Old Port Dubrovnik is located in the Eastern part of the City from where you can take various sightseeing boats tours such as to nearby Lokrum island, Cavtat, and Mlini.

7. Walk along the St. John Fort 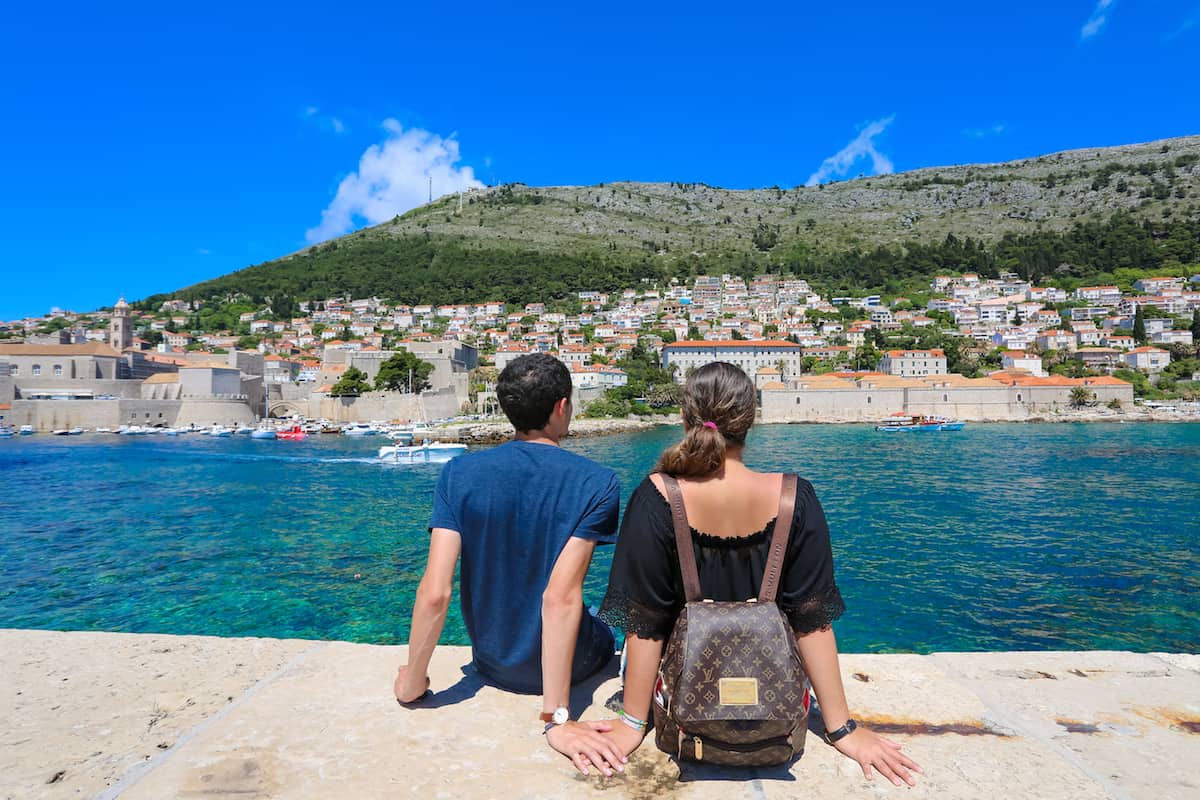 St John Fort houses the Maritime Museum and the Aquarium. Maritime Museum with its exhibits speaks of the most important activity in the history of the City and of the development of its trade with numerous valuable marine items. In the large Aquarium hall in the fortress, visitors can enjoy Adriatic fauna specimens and fish sorts found in the Croatian Adriatic.

Next to a city coffee house are the chambers of the city council followed by the Marin Držić Theatre named after  the Dubrovnik’s renowned 16th century Renaissance playwright. In between the Rector’s Palace and the city bell tower is the City Council Palace, built in the 14th century.  The buildings are yet another example of Dubrovnik’s amazing architectureal splendour.

Again, it is not possible to go inside of these two venues, except to the theatre to see a show. 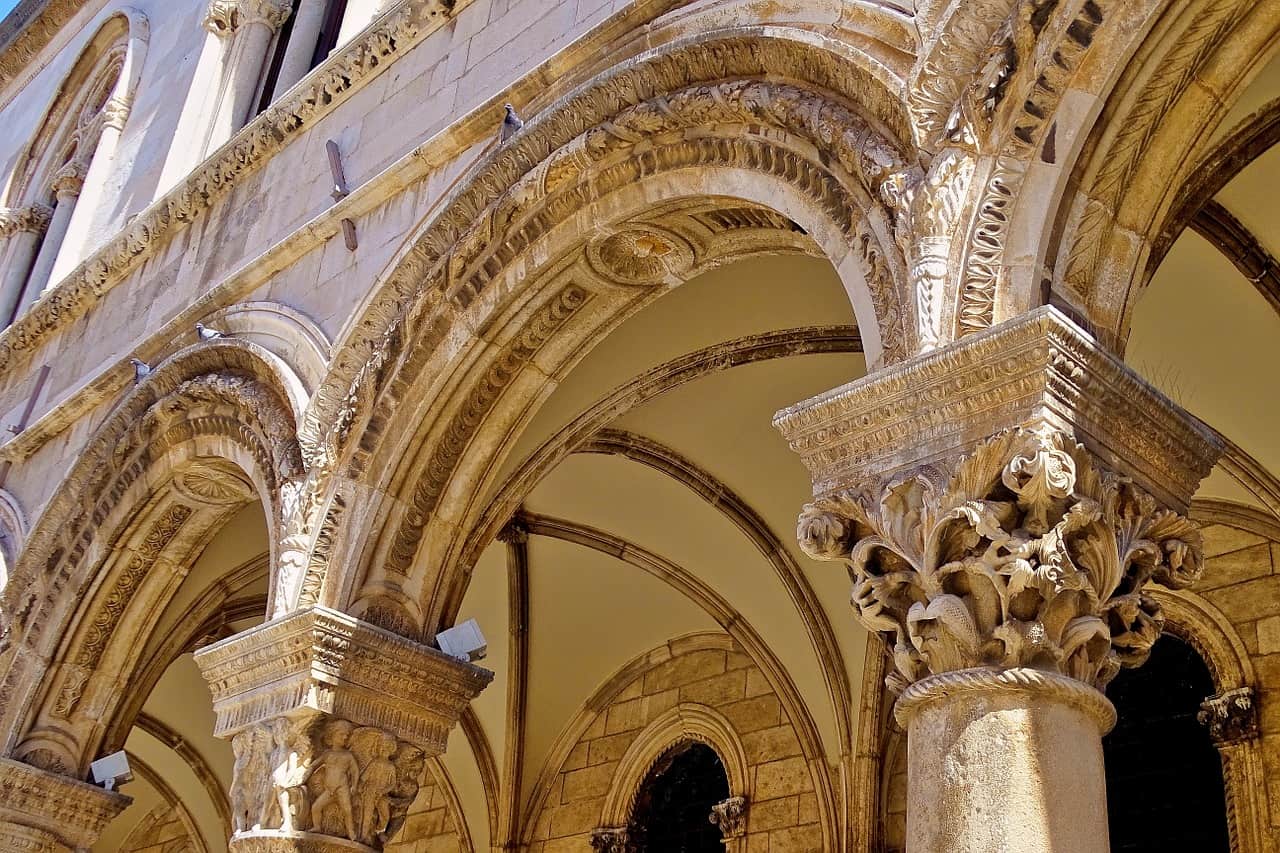 The most important building where all decisions and laws regarding the governing of Dubrovnik Republic were brought. It was the home of the rector who was elected each month by the Great council to represent the Dubrovnik Republic for a period not longer than one month in order to circumvent the possibility of corruption. During the time of obtaining the honourable position, rector wasn’t allowed to leave the palace at anytime except on government business which completely fits into the famous Dubrovnik Republic governing principle: ‘Forget private affairs, deal with state affairs’

Ticket costs 120 kuna but in case you bought a ticket before to visit the Maritime Museum, you can use the same ticket. The palace is open from 9 AM to 6 PM.

4. Go inside the Dubrovnik Cathedral – Treasury 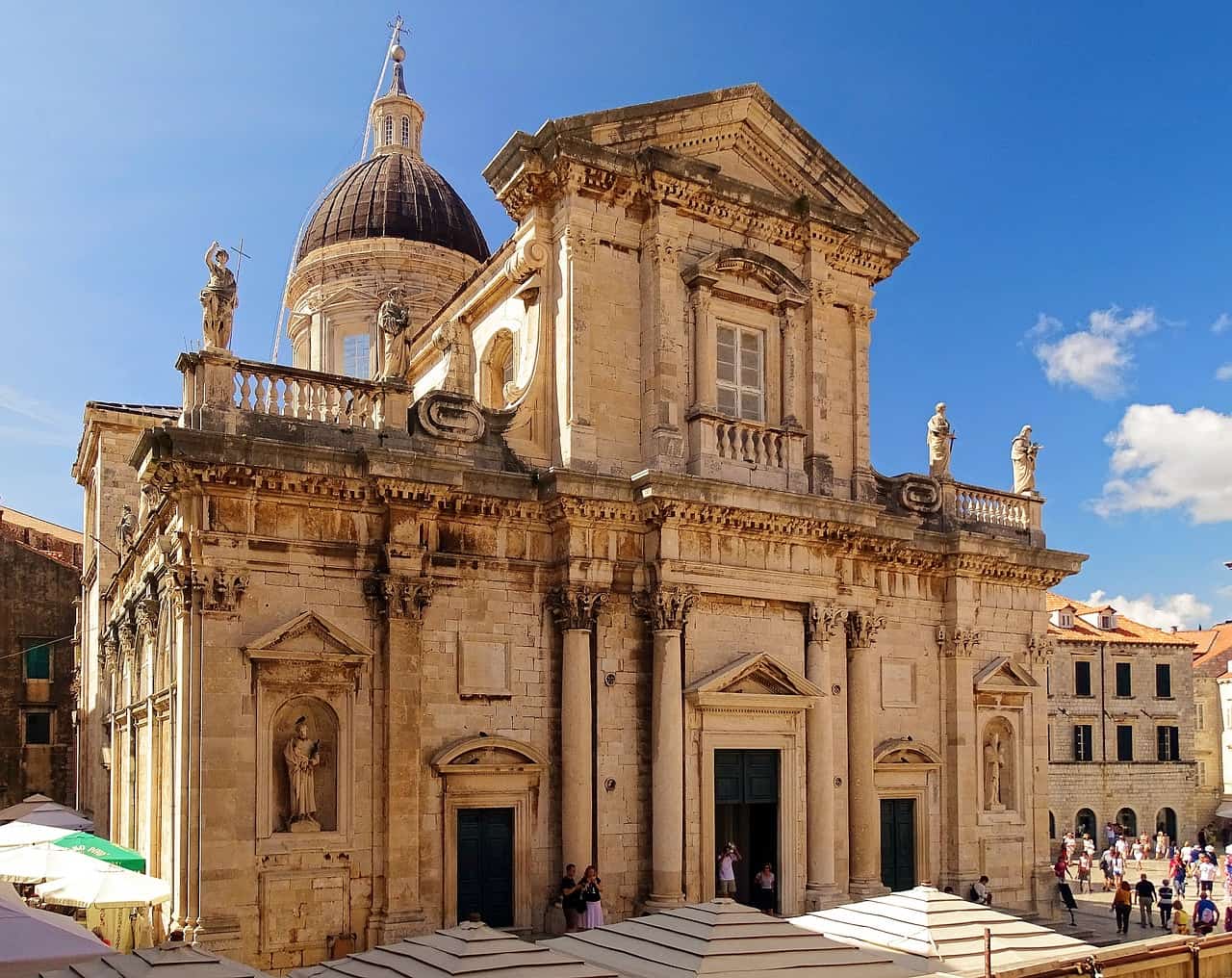 Dubrovnik’s cathedral stands in the center of Poljana Marina Drzica, close to Rector’s Palace. According to a legend, Cathedral from the 12th century was built with the money of English King Richard of Lion heart who had experienced a shipwreck near island Lokrum after he came back from the Third Crusade war in 1192. If interested in church treasures and relics, you may want to visit the treasury inside the cathedral housing 132 relics of saints dating from the 11th to the 19th centuries.

The Old Synagogue in Dubrovnik is said to be  the oldest Sefardic synagogue still in use today in the world and the second oldest synagogue in Europe. Part of the synagogue serves as a museum with display of numerous Jewish ritual items and centuries-old artifacts.

Ticket costs 40 kuna. The Synagogue Museum hours are from 9 AM to 9 PM.

2. Take a photo of the Ploce Gate

The main entrance to Old Town from the Eastern side is Ploce Gate. Above the entrance of the Gate, there is a statue of St. Blaise, the patron saint of Dubrovnik. The Revelin Fortress is built into the outer section of the Gate as a lookout point for towns eastern approach and we liked it for the views at Old Port.

1. Walk along the Fort Lovrijenac

Fort Lovrijenac is situated 37 meters above the sea level outside of the western wall of the city with two drawbridges leading to the fort itself. Yet another beautiful example of the centuries-old stone masonry. Once there, you may notice an inscription above the gate, Non Bene Pro Toto Libertas Venditur Auro (Freedom is not to be sold for all the treasures in the world).

Fort Lovrijenac is accessible by taking a regular walk atop the city walls.

⇟ More articles from Croatia that might interest you:

➳ Read More: The best things to do in Split in 2 days 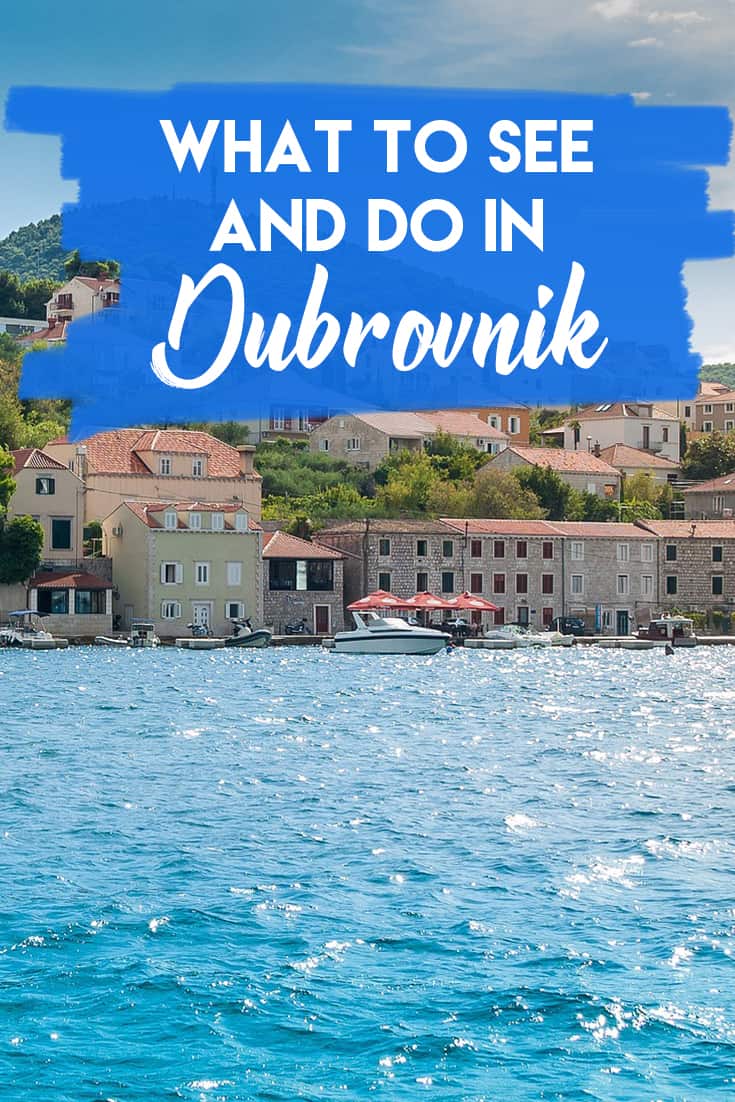