Skip to Content
Our trip to Quilotoa was a stop on a longer Northern Ecuador roadtrip. See our complete Northern Ecuador travel guide. The town of Quilotoa IS known for the famous Quilotoa lake with clear blue waters. Along the route towards the lake, we spotted a pull off packed with cars, so we decided to stop as well. It turns out we had just stumbled upon the Cañón del Rio Toachi. The best way to describe it is it is like the Grand Canyon, if the Grand Canyon fit into your backyard. It is definitely worth the stop if you are driving by it, but not worth going out of the way to visit. We arrived in Quilotoa around 4:00 PM, with hopes of seeing the famous Quilotoa lake before dark. However, at over 12,000′ the city was blanketed in so much fog we could hardly see across the street, a daily occurrence there. Instead, so we decided to stay at the hostel for a much needed nap. The village of Quilotoa charges $2 per person entry, but it covers the cost for parking and entrance into the Laguna de Quilotoa ecological reserve. We stayed at the Hostal Cabañas Quilotoa, which cost us $20 per person for the night, it also included breakfast and dinner at the neighboring hostal, under the same ownership. We were given a room with two queen size beds, so my guess is if four people stay in the room, the cost per person does go down. The food was acceptable, but there was more than you could eat. The bedrooms had wood stoves for heat, which were supposed to be started before bed. However, we stayed up late talking with other travelers, so ours was never light. It was no problem though, due to the abundance of comforters provided. Our shower did not have hot water, so we assumed the whole place lacked it. Turns out it was just our shower that was broken, and we should have complained, but we only found out after we checked out of the hostel!

Things to do in Laguna de Quilotoa:

The hike down to Quilatoa lake took us an hour, including many stops to take photos, and can be done in 30-45 minutes with no stops. The hike is a 280-meter vertical decent from the rim to the lake. It is steep and a bit slippery at times, so watch your step and wear proper shoes. At the bottom of the trail there are two ways to go, to a more central hill in the bottom, or directly to the shore of the lake. I would suggest heading straight to the bottom, as the view is much better from the lake itself. From atop the hill, the view is too similar to the view from the rim, and did not warrant the hike for me. You can also chose to camp at the base, but there is no water or bathrooms, and the weather is not the most friendly to campers; think cold, rain and windy. 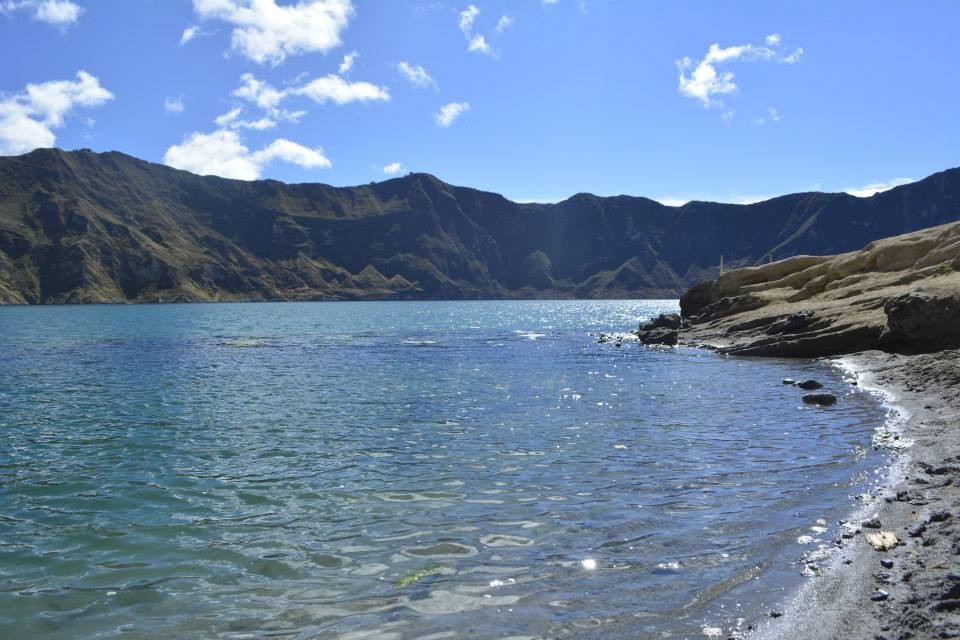 Round trip up and down took about three hours, and the walk up is not easy due to altitude and blowing sand from the path. I would suggest a hat and a cloth to cover your mouth and nose from the dust. You can also hire a donkey to carry you up and down for $10. The donkeys also kick up more dust in addition to the wind, and are heavily used on the path to get supplies to infrastructure projects going on at the base. There is plenty of activities to enjoy at the bottom of the lake such as swimming and kayaking. Remember, Quilotoa is at a high altitude, so drink lots of water and apply ample sun protection. We suggest arriving in the afternoon, and hiking the next morning, as it allows time for your body to acclimate a little to the altitude.