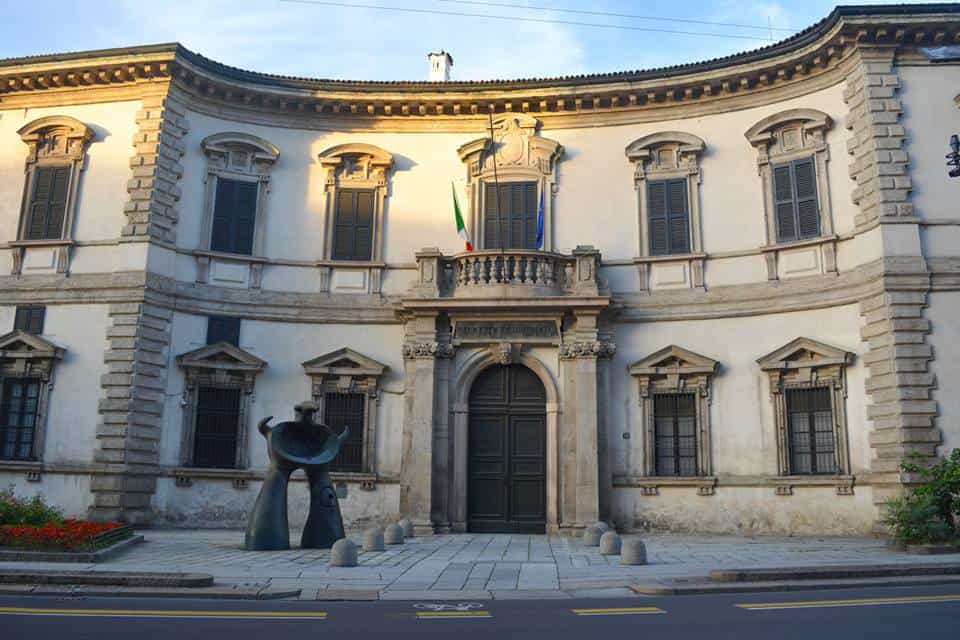 Milan is the most populated Italian city after Rome, the city of fashion and luxurious high-end brands, a city of some of the most famous world artworks, the city where incredible mastermind of Leonardo Da Vinci resided. In Milan you will not have a dull day!

There are incredible examples of Renaissance architecture, countless museums, art galleries, and great discounts on branded clothes towards the end of the year. These are only a few reasons why Milan should make your bucket list.

Walking Map of Milan in 16 Kilometers 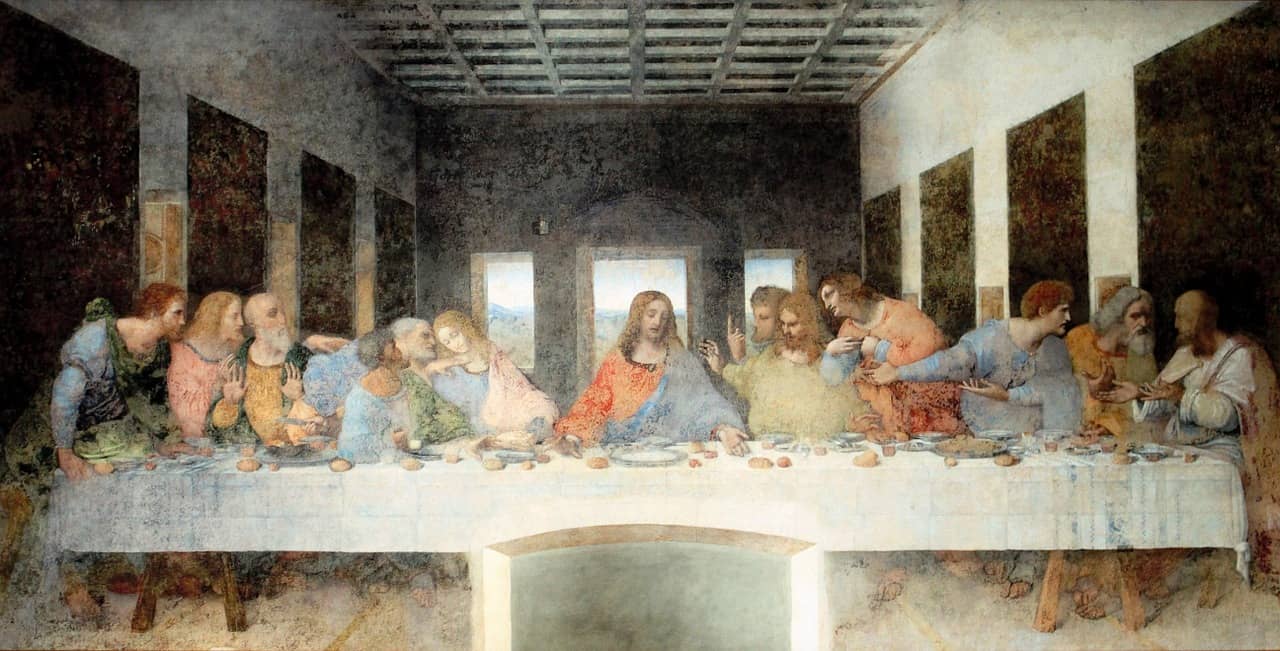 This terracotta church and adjacent convent have been a World Heritage Site since 1980 guarding  Leonardo Da Vinci’s Renaissance masterpiece ‘Last Supper’ (Cenacolo Vinciano). You are only allowed 15 minutes per viewing as there are too many people in line to see it.

Tours of the Santa Maria delle Grazie are available Tuesday through Sunday by reservation only. Tours are €38 per person.

La Vigna di Leonardo is one of the most interesting gardens in Milan with vineyard and original vines Leonardo Da Vinci himself took care of when he was gifted the land by Ludovico Sforza in return for his work on The Last Supper. It is situated behind the 15th-century Casa Degli Atellani.

La Vigna di Leonardo is open daily from 9AM to 6PM. Tickets are €10 per adult.

Biblioteca Ambrosiana was founded in 1609. Today this library has 30,000 books and manuscripts including fragments of the gospels of Matthew, Mark, and Luke. It also houses Pinacoteca Ambrosiana art collection with artworks such as the Da Vinci’s Portrait of a Musician, Caravaggio’s Basket of Fruit, and Raphael’s cartoon of The School of Athens.

The Biblioteca Ambrosiana is open Monday through Friday from 9AM to 5PM. Tickets are €15 and €10 to the Baptistry.

A tribute to Leonardo da Vinci, science, and technology, the museum has over 10,000 items throughout three floors. It includes the work of the great master Leonardo, Pascal’s 1642 abacus and the more recent first IBM processor. If interested in horology, telecommunications, astronomy, physics, optics, acoustics, and metallurgy, then this is a must-see place on your Milan itinerary.

Museo Nazionale della Scienza e della Tecnologia Leonardo Da Vinci is open Tuesday through Friday from 9:30 AM to 5PM and Saturday and Sunday from 9:30 AM and 4:30 PM. Tickets are €10 per adult.

The Basilica di Sant’Ambrogio is a Romanesque basilica rebuilt in the 11th century atop an original basilica dating from the 4th century when Bishop Ambrose consecrated it. He was buried here next to local martyrs and is still on display in the crypt.

Nine Italian kings were crowned here over the course of 6 centuries. The most notable features are large atrium, the bell tower and Canon’s Tower together with interior featuring biblical scenes and reliefs.

Porta Ticinese is a former city gate of Milan in a district that was, in Middle Ages, an important trading center of the city. Today, together with Navigli district, it is an area known for an exciting nightlife. 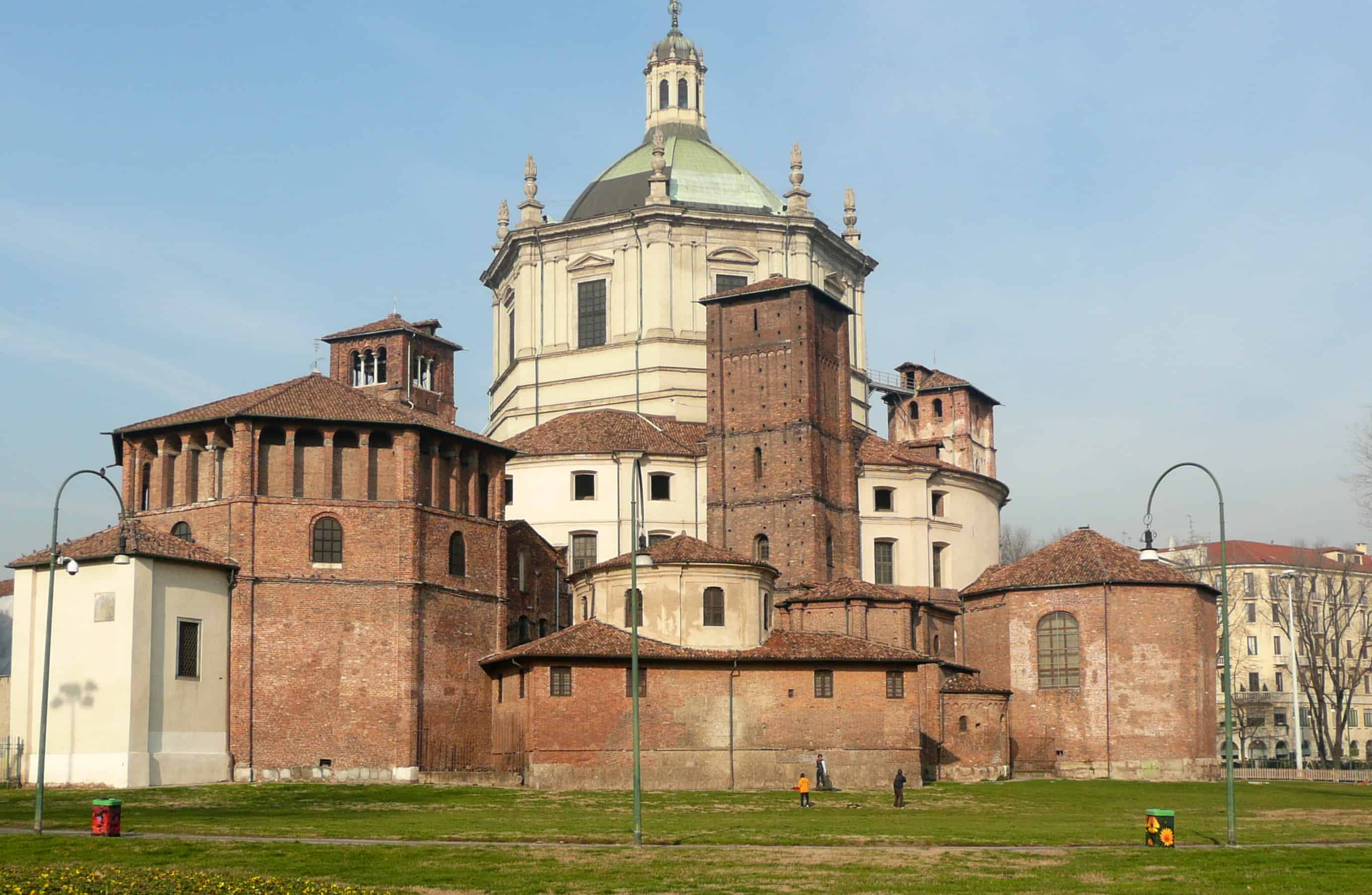 Basilica di San Lorenzo Maggiore is one of the oldest churches in Milan that has undergone a few reconstructions. It is known for its Colonne di San Lorenzo, 16 Corinthian columns argued to have been moved here from a pagan temple in the 300s. In the courtyard stands a statue of Emperor Constantine as a tribute to his Edict of Milan in 313, which ended Christian persecution within the Roman Empire.

Sitting on an area of 7000 square meters, the Royal Palace of Milan has for centuries been the seat of government of the city of Milan. It was even more important during the era of Napoleon when Milan was the capital city of Kingdom of Italy. Today it is a major cultural venue with different rotating modern art exhibitions and events. 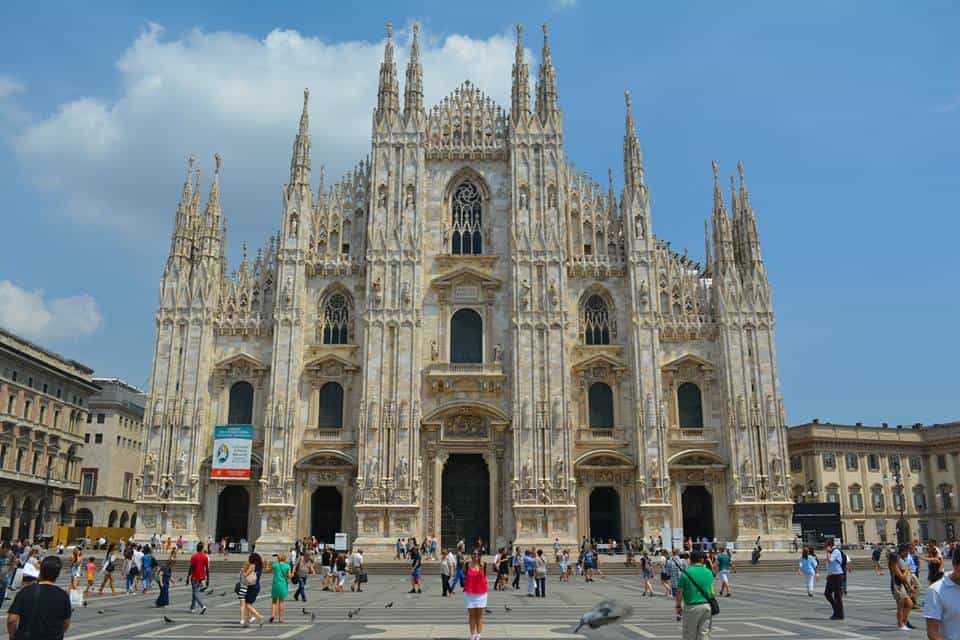 Duomo di Milano is a sight to behold. This breathtaking piece of Gothic architecture with 135 spires and 3200 statues at Piazza del Duomo where most of the festivities and celebrations take place. Milan’s cathedral is the third largest church in Europe and it took nearly five centuries to be finished.

You can take a lift, or the cheaper option, the stairs, to get to the roof and admire the view of the Alps and Piazza del Duomo. Once inside the church, one can admire the 146 stained-glass windows and the 52 pillars of the five aisles representing the weeks of the year. If you lose track of time, look for the floor Sundial near the entrance.

The cathedral is open daily from 7AM to 7PM. The Rooftop tickets are €12 by lift and €8 on foot. Price: Hours and prices for the baptistry & early Christian excavations vary, so check out the website for the most up to date information.

Walk down the Buenos Aires street towards the old city. Along the road are the fancy upscale store such as Dolce & Gabana. We passed the Indro Montanelli Garden which also has the planetarium. Street changes name to corso Venezia and then to Corso Vitto Emanuele II leading straight to Piazza di Duomo. 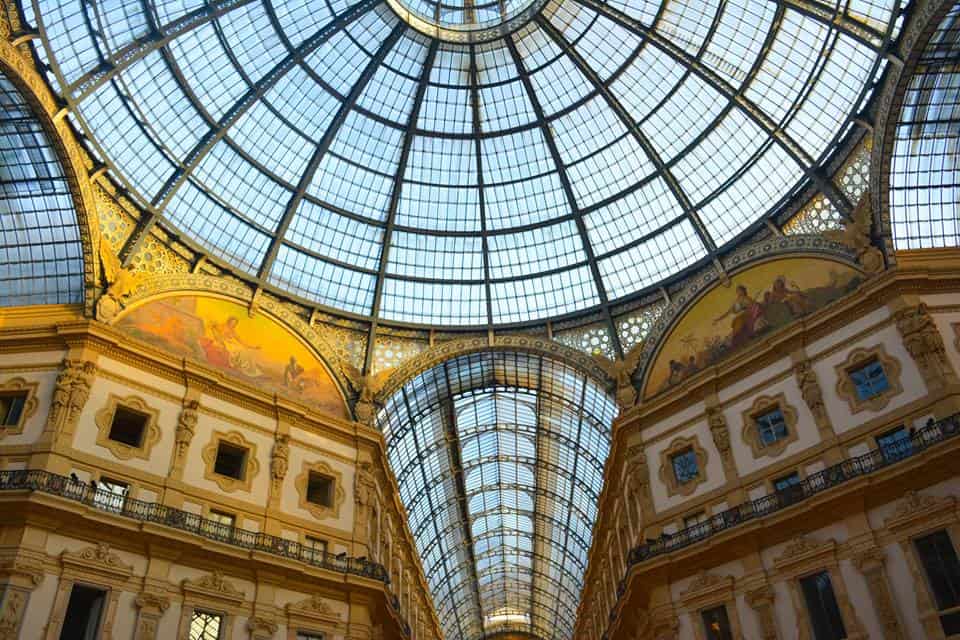 Gallery Vittorio Emanuele II is a famous meeting place and one of the world’s oldest shopping malls. This arcade was designed by Giuseppe Mengoni who unfortunately fell from the arch just one day before the gallery was finished. The interior is full of patriotic symbols, especially on the mosaic floors.

Among visitors the most popular such symbol is the bull of Torin because of a superstition how if you place the heel of your foot on the genitals of the bull and then spin around, it brings good luck. 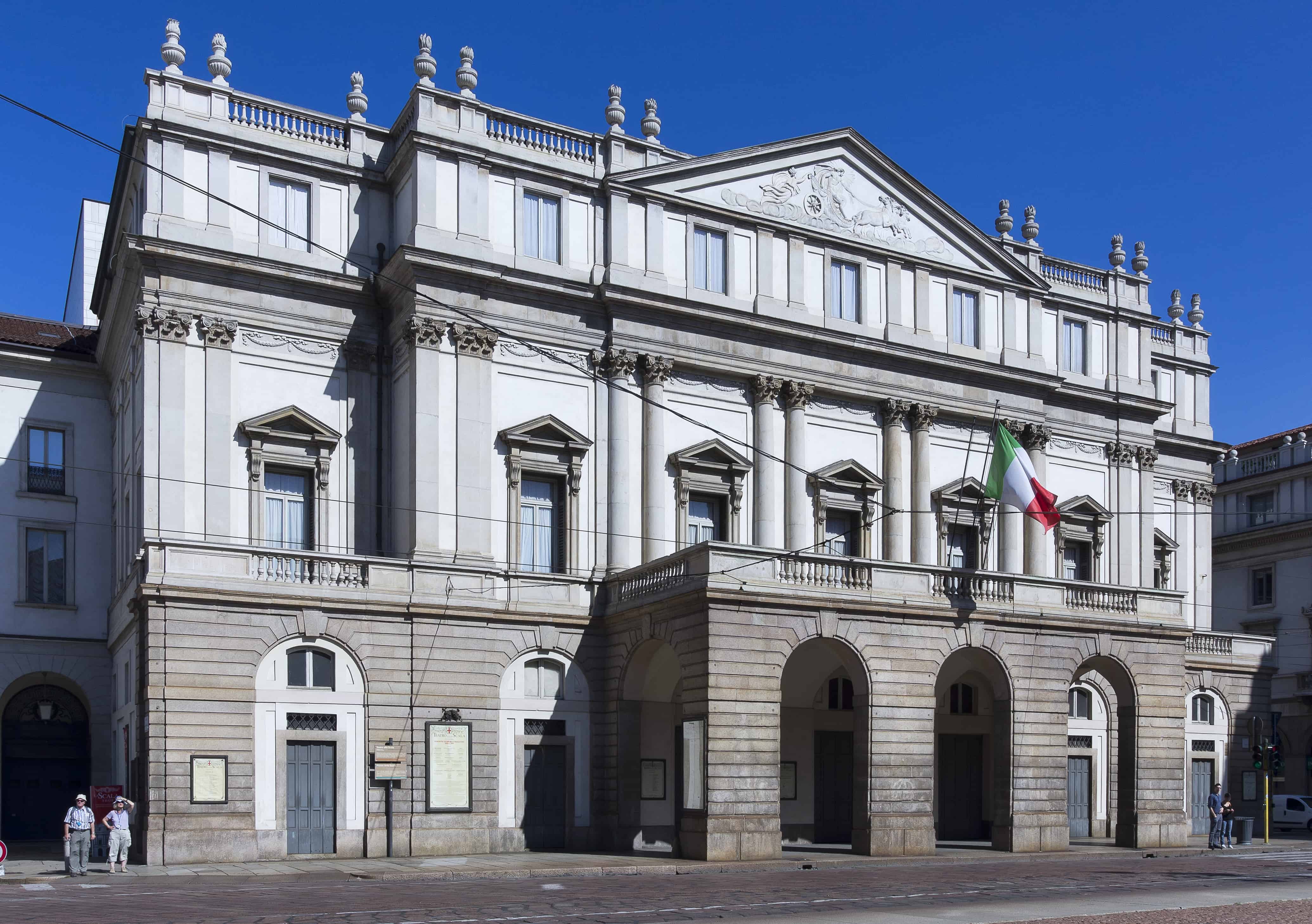 The world renowned Teatro Alla Scala opera house was founded in the 18th century with enough place for 1,987 spectators. Museo teatrale alla Scala is dedicated to operatic history. Just a peek inside the main hall together with a view of the gold and mirrored entryway that once served as a casino in Scala’s early days is well worth the visit.

During long travels across Europe and after inheriting a fortune at the age of 24, Gian Giacomo Poldi Pezzoli came up with an idea to turn his apartments into a series of themed rooms based on the great art periods.

The museum is open Wednesday through Monday from 10AM to 6PM. Tickets are €10 per adult.

The art collection of the Bagatti Valsecchi Museum is thanks to the efforts of two brothers, barons Fausto and Giuseppe Bagatti Valsecchi. The works are preserved and promoted in a house museum with an aim of representing a lordly Renaissance home from mid 16th century.

The museum is open Tuesday through Sunday from 1PM to 5:45 PM. Tickets are €9 per adult.

Quadrilatero d’Oro is the world’s most famous shopping district. It consists of a quadrangle of streets with shops of all the big high end fashion names and brands such as Versace, Armani, etc.

Giardini Pubblici Indro Montanelli is the oldest park in Milan dating from the year 1784. Today it is home to the Museo Civico di Storia Naturale, a museum dedicated to natural sciences, Planetario di Milano, Villa Reale, and Palazzo Dugnani.

Pirelli Tower is one of the earliest examples of modern Italian architecture, the first skyscraper in Milan and one of the landmarks of post-WWII Milan. Pirelli tower was praised by architectural historians as ‘one of the most elegant tall buildings in the world’. It has 32 floors and is 124 meters tall. It is situated not far from Milano Central Station, so it will surely catch your eye. 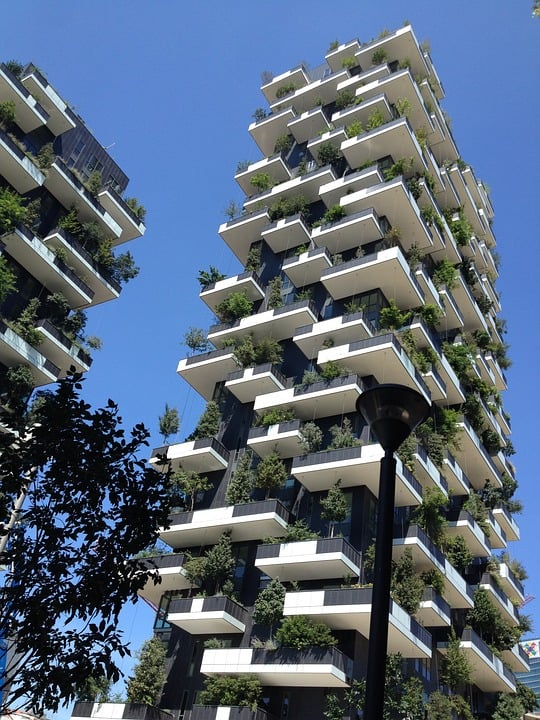 Bosco Verticale are two residential towers designed with an intention of cleaning the polluted air. Although you cannot enter the buildings, you can admire plants, shrubs, and trees on the facade that not only cleans the air, but cools down the building in the summer and keeps it warm in winter. 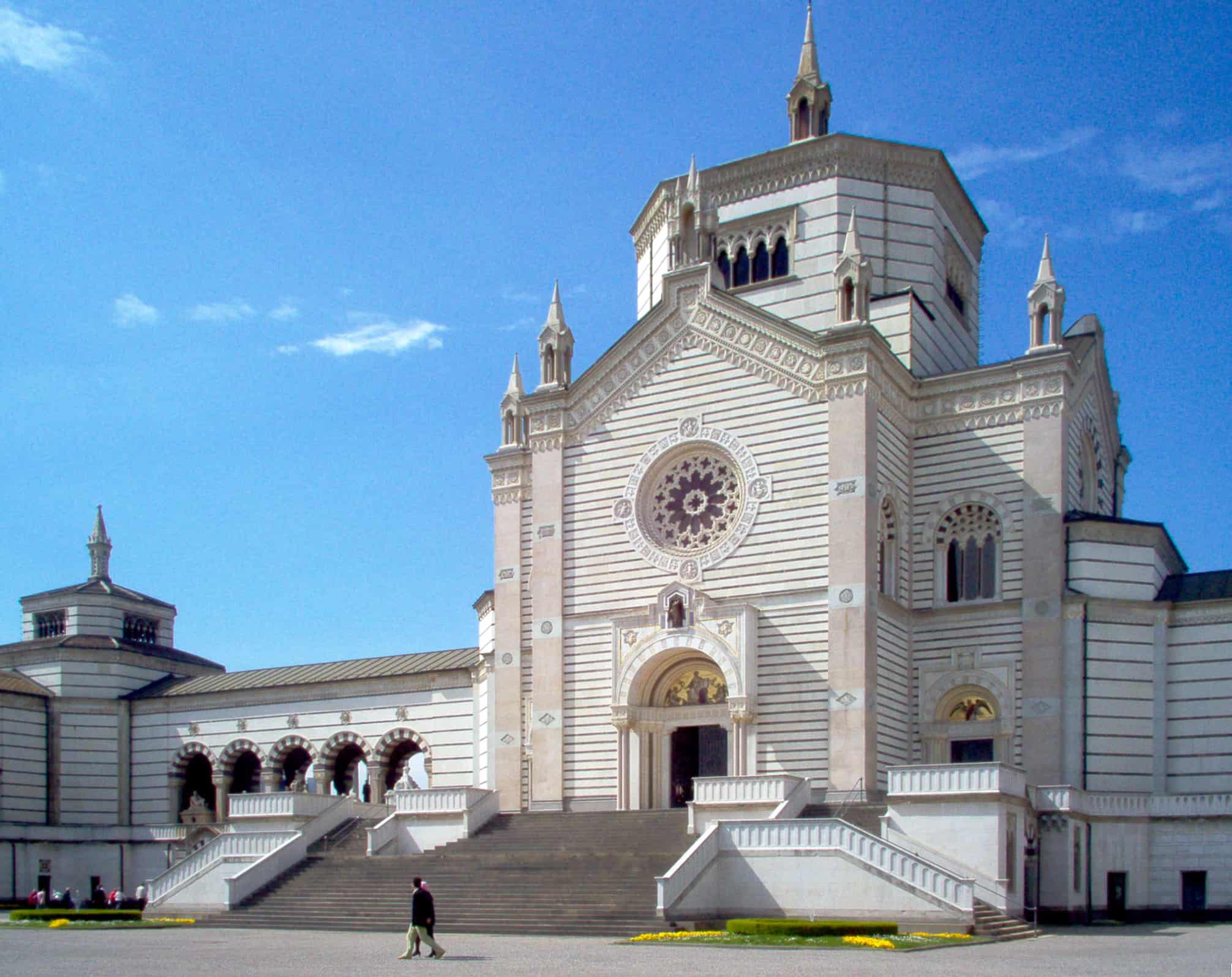 Cimitero Monumentale di Milan is a place of serenity, and beautiful cemetery architecture. This is one of the largest cemeteries in Milan where many famous Milan residents have been buried. Coming here is in its own right like visiting and walking through a museum with a myriad of exceptional monuments, tombs, and chapels.

The cemetery is open Tuesday through Sunday from 8AM to 5:30 PM. 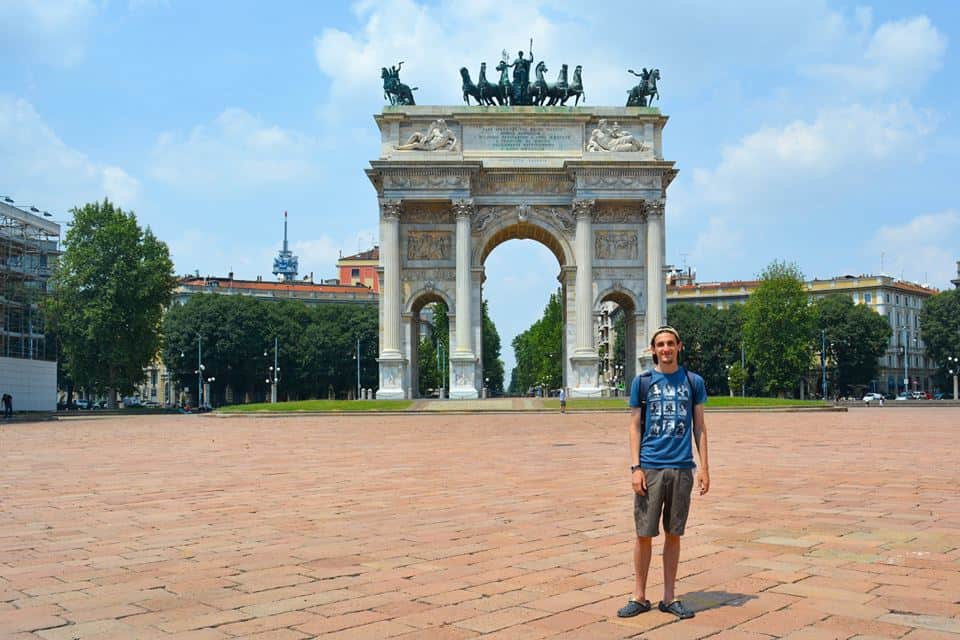 A city gate of Milan marked by a landmark ‘Arco Della Pace’ (‘Arch of Peace’) dating back to the 19th century although the origins can be traced all the way back to the Roman times. The new gate marked where the Strada del Sempione connecting Milan and Paris entered Milan.

Porta Sempione is also used as a name for the historic city center with a major avenue of Corso Sempione. In the area, you will also find the biggest park in Milan, Park Sempione.

The Museum is open Tuesday through Sunday from 10:30 AM to  8:30 PM with last admission one hour before closing. Tickets are €10 per adult. 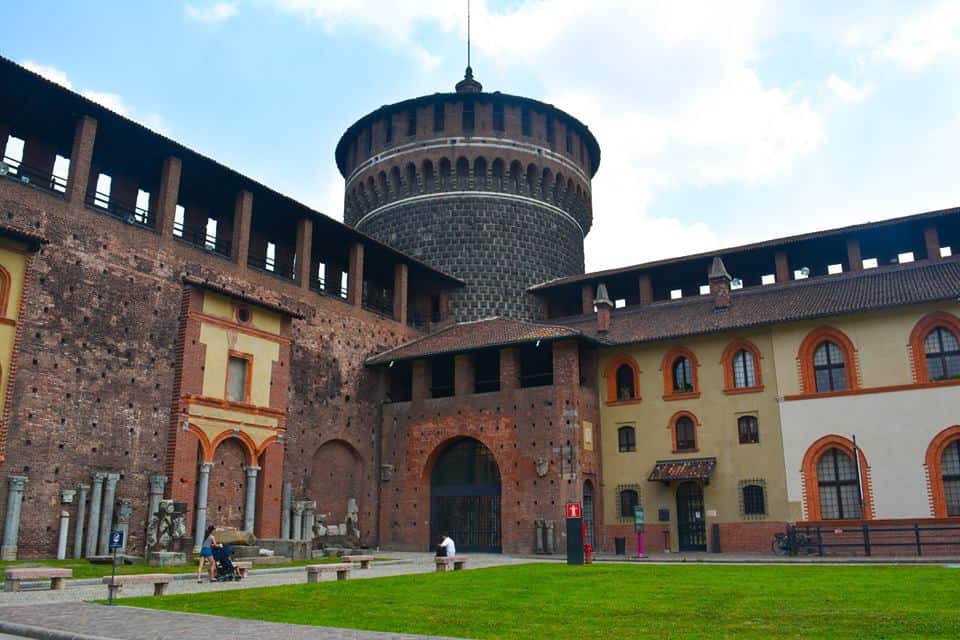 Located in the center of Milan, Sforza Castle is probably the biggest attraction together with Duomo. It was built by a Duke of Milan Sforza in the 15th century as his residence.

A collection of 12 smaller museums are located here. Just to name a few: The Museum of Ancient Art, the Egyptian Museum, the Applied Arts Collection, the Museum of Musical Instruments or the Pinacoteca with a few works of Leonardo da Vinci and Michelangelo too. Outside, the area is graced by a large English style park where you can take a rest from sightseeing.

The grounds are open daily from 8AM to 6PM. The museums are open Tuesday through Sunday from 9:30  PM to 5:30 PM. Entrance to the Museum is €5, or a combined ticket with all civic museums for 3 days €12. Tuesdays after 2PM and daily after 4:30 PM entrance is free. 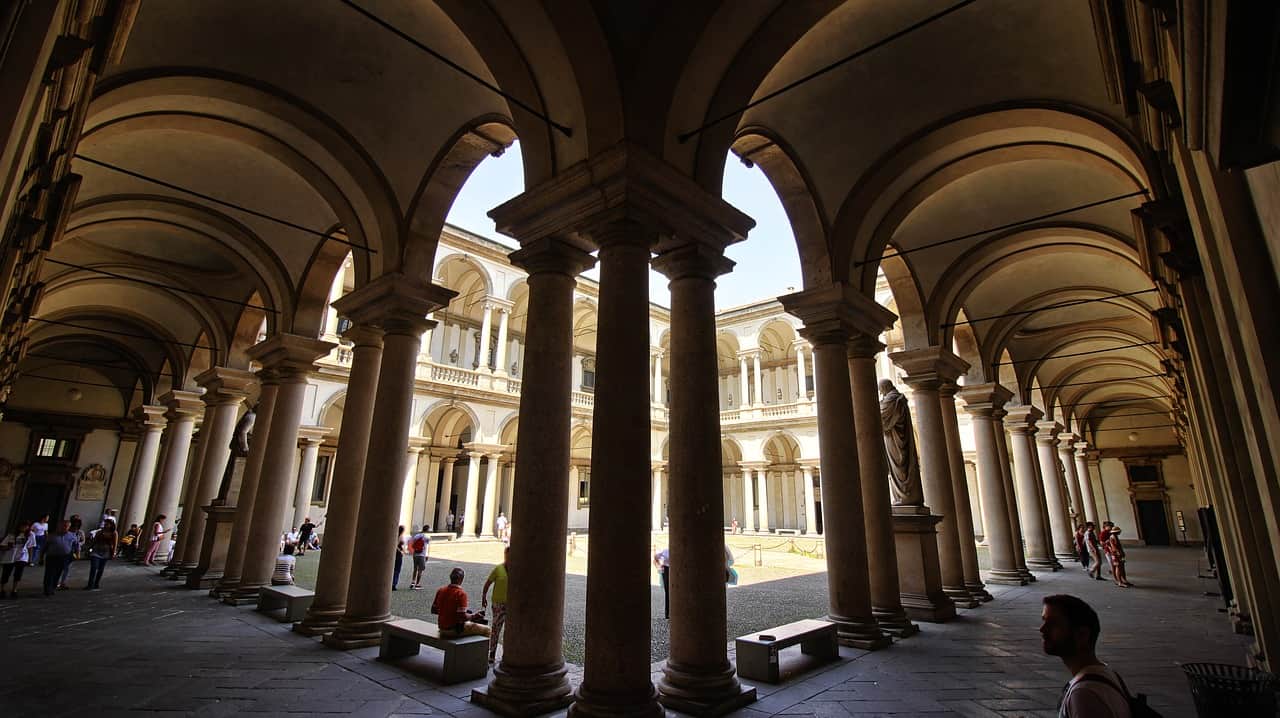 There is an outstanding art collection inside Palazzo di Brera from churches and monasteries appropriated by Napoleon. The collection features artworks by major Italian painters from 13th through the 20th centuries including Caravaggio, Giovanni Bellini and Donato Bramante. The botanical garden behind the Pinoteca is also a nice place to take a rest.

Pinacoteca di Brera is open Tuesday through Sunday from 8:30 AM to 7:30 PM. Tickets are €10 per adult, and free every first Sunday of the month.

In Piazza Duomo, next to Palazzo Reale, is situated Palazzo dell’Arengario, a complex dating from a Fascist-era when it was the seat of local, Fascist government. It is comprised of two symmetrical buildings and today houses the Museo del Novecento, one of the largest national collections of Italian and international 20th century art with works by both Italian, and foreign artists.

Naviglio Grande is the first and largest canal in Europe that once connected Milan with Switzerland so people could transport and trade with various goods. Today, it has a very romantic atmosphere, especially during the night, with many places to stop by for a dinner or drinks.

Housed in what formerly was known as Villa Reale, Napoleon’s residence of choice once he entered the city in 1802. The 19th century art collection spans 35 rooms over two floors with paintings and sculpture works of such names as Giorgio Morandi, Giuseppe Pellizza da Volpedo, Van Gogh, Cézanne, Matisse, Picasso and many other.

The Galleria d’Arte Moderna is open Tuesday through Sunday from 9AM to 5:30 PM. Tickets are €5 per adult and free daily after 4:30 PM and Tuesdays after 2PM. 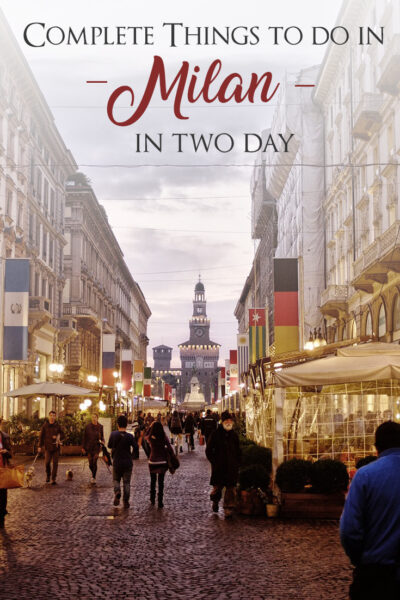