Sucre is the capital of Bolivia, the 6th largest city in the country and one of the most beautiful cities in Bolivia, with the majority of its buildings painted white.

Sucre is the only capital in South America where all the administrative and governmental buildings are located elsewhere, in La Paz. The city is full of history as it is the birthplace of Bolivia.

You can spend several days enjoying the relaxed pace in Sucre but in reality you only need one or two days to see the city. It all depends what you are interested in doing. If you want to visit all of the museums then you might need to stay three or four days. 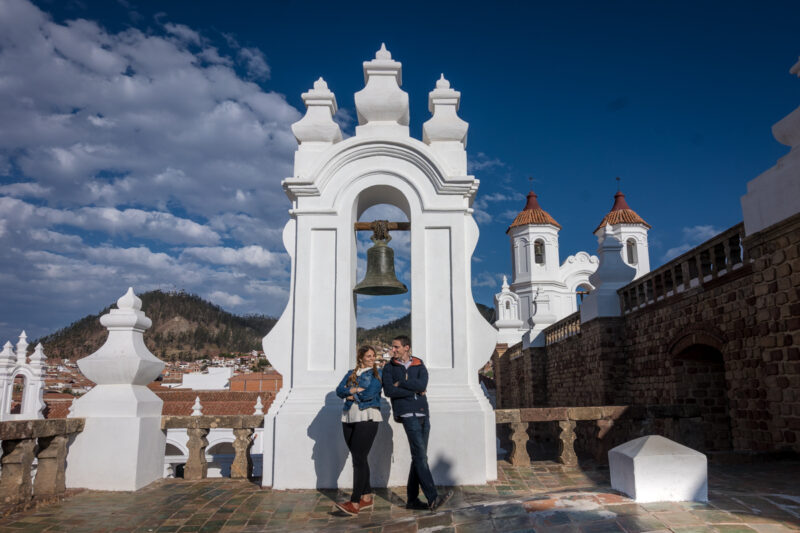 Sucre is a UNESCO World Heritage Site and a fascinating window into South America’s past, with many of its old colonial buildings immaculately preserved.

The best things to do in Sucre in one day: 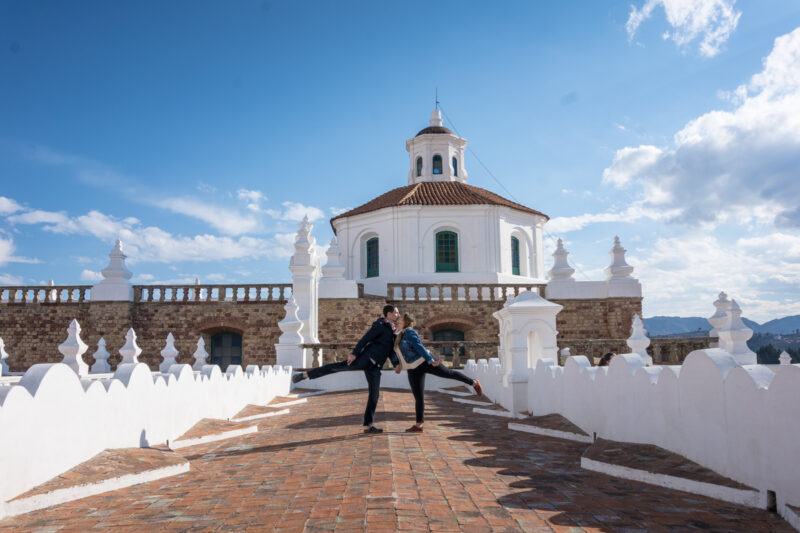 A quick disclosure, I had recently finished watching the show “Bolivar” on Netflix before this trip and it honestly left me obsessed with the independence of Bolivia, Peru, Ecuador, Colombia and Venezuela. So being in Sucre and visiting all the monuments in honor of these heroes really made my day!

It is big park where locals get together and hang out. The main thing in the park is enjoy the big fountain “Fuente del Bicentenario” which is more beautiful when it is illuminated in the evening. Even though it is named after him, there is not a statue of Simón Bolivar, we looked!

The main square of Sucre is Plaza 25 de Mayo which is surrounded by the most important buildings in the city. These include the White Cathedral, La Casa de La Libertad museum and other museums.

It is quite an uphill walk to the La Recoleta Viewpoint, unless you choose to take a taxi, but of course the walk makes the view that much better, and what a view of the city! The San Francisco Monastery is located here as well.

The Convent of San Felipe Neri is one of the best places to see the city of Sucre from above. Climbing all the way to the rooftop of the church you are met with a panoramic view of Sucre and an up close view of the neoclassical style architecture. The church opens after 3:00 PM. Entry to the church costs 15 bs (Around $2 USD). 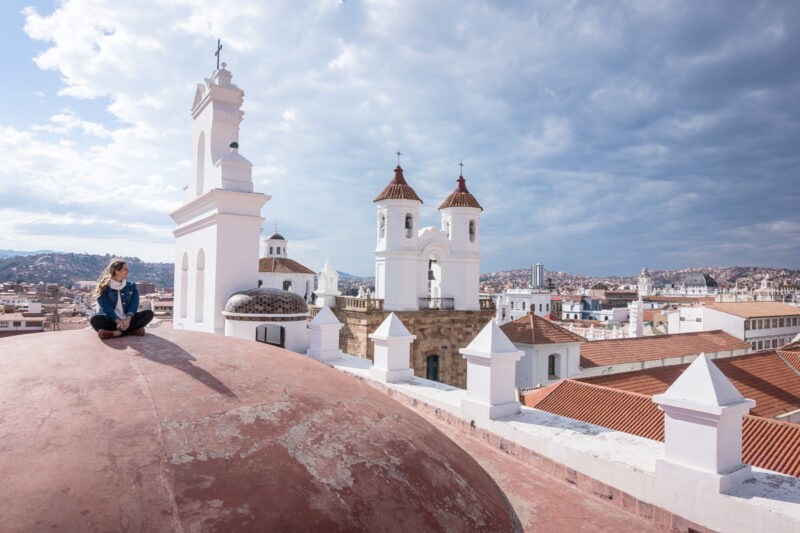 Across the street from San Felipe de Neri is the Iglesia La Merced, which also offers an amazing view of Sucre from its rooftop. The entrance fee is cheaper and it opens earlier in the day as well. 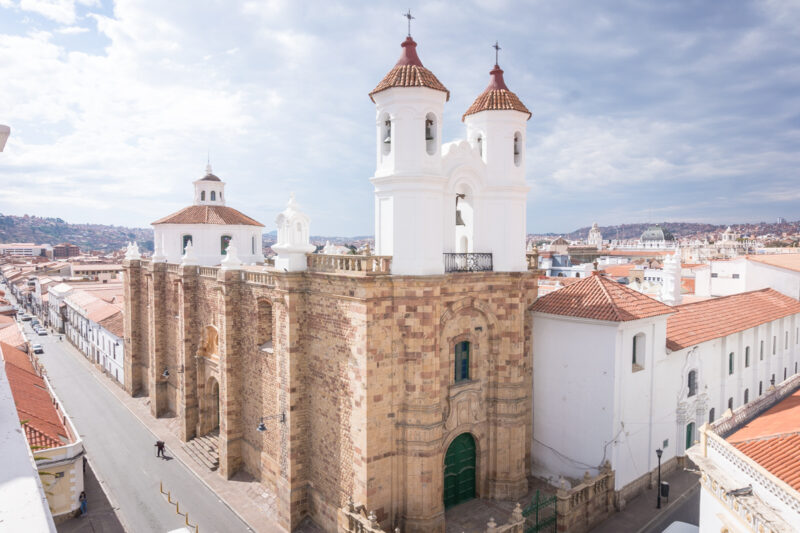 What we like the most about the Iglesia La Merced viewpoint is that that you can take pictures with the beautiful San Felipe de Neri in the background. Entry to the church costs 10 bs (Around $1.5 USD).

The museum is open from Tuesday to Sunday from 9 AM to 12:30 PM and from 2:30 PM to 6:30 PM. This is the place to learn everything about the Independence of Bolivia, as it is where the modern Bolivia was born in 1825.

In the museum you will see the first patriotic flags of the modern countries of Argentina and Bolivia, along with the tomb of Juana Azurduy de Padilla, who is known for her military leadership of the indigenous people of Upper Peru and many other historical relics.

La Glorieta Castle bright pink fairy tale castle about 20 minute drive south of Sucre. The castle was built by Don Francisco Argandoña Revilla who made a fortune in the mining industry and private banking along with marrying the daughter of a wealthy Spanish family.

He built this unique castle finishing in 1897. Its highlights are three towers featuring drastically different architectural styles. There is a Gothic chapel tower, the Russian-inspired Prince’s Tower and an octagonal, Chinese Pagoda Princess Tower.

After meeting the Pope León VIII in 1898, he admired their charitable work so much that he gave them the title of Prince and Princes over La Glorieta.

Parque Cretacico offers a giant leap back in time with the largest paleontology site in the world, a massive wall covered in thousands of dinosaur footprints.

You can only get up close to the wall, were you can actually see the footprints, on a guided tour. This is included with the cost of your entrance ticket and the guide will make sure you do not miss an exciting artifact. There are also a handful of life size dinosaurs that you can explore at your own pace.

To reach the park you either need to take the #4 Bus or grab a taxi. The park also runs its own bus which picks up in front of the cathedral on Plaza 25 de Mayo.

The Facultad de Derecho is an amazing building worth seeing as due to its typical Bolivian architecture.

How to get to Sucre, Bolivia

Sucre is located in the center of Bolivia and is connected by direct bus routes from other major cities including Santa Cruz, La Paz, Potosi, and Uyuni near the famous salt flats.

There are many bus companies that operate on each route, with similar prices and experiences across the board. Due to the distance from other popular Bolivian cities, many of the bus lines run overnight daily.

Most buses offer semi-reclining and fully reclining seats so you can get as close to a good night’s sleep as possible on the bus. The Sucre bus terminal is located less than 2 kilometers or 25 minute walk from the historic city center.

Sucre does have an international airport, but only has about a dozen flights per day from destinations around the country.

Where To Stay In Sucre, Bolivia

Sucre has a range of budget hostels and small boutique hotels. However accommodations in Sucre, Bolivia are often simple rooms with nightly prices to match. You can easily find a hostel for $10 per night or a private room for $25.