Walk Through History in Philadelphia in 15 Kilometers

Philadelphia is full of history and beauty. We stayed for two full days and it was not enough. We recommend to at least visit Philadelphia for a whole week. It has interesting museums and a lot of beautiful places to visit such as the historic downtown. 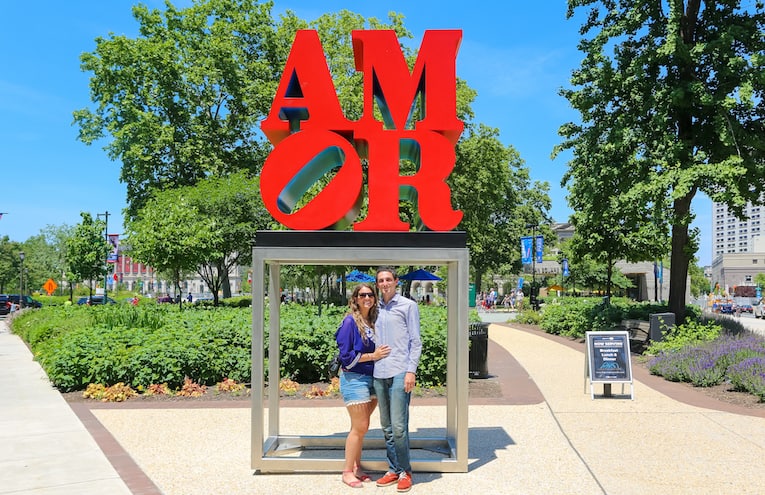 The Museum of American Jewish History houses a collection of 350 years of the Jewish life in America. It covers a broad range of topics and obstacles that Jews have faced throughout history in the United States including immigration, worship, hard work, entertainment, and community and family life.

Tickets cost $15 per person. The museum is open with the following hours:

There are also plenty of free admission days and closed holidays throughout the year, so make sure to verify your date of visit with the hours online. 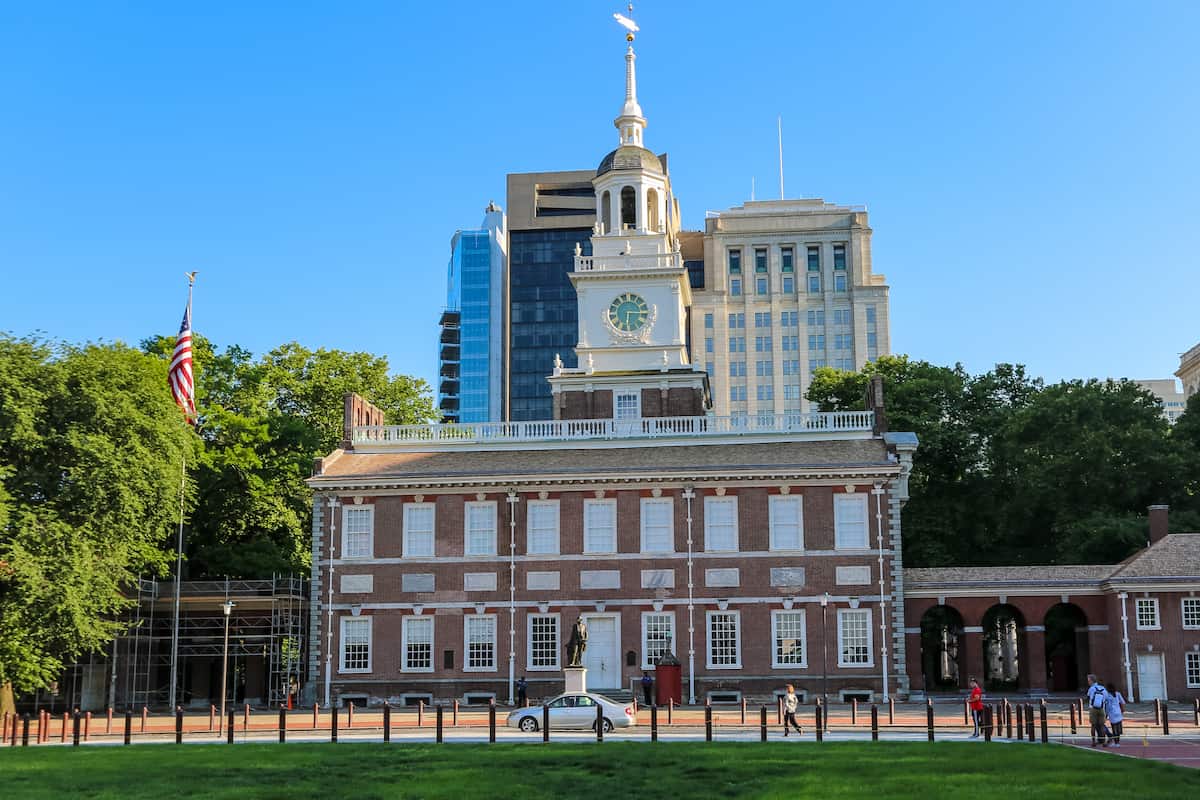 Witness the birthplace of a nation in one hall. Independence Hall is where The Declaration of Independence was signed and adopted and the U.S Constitution was debated and created. There is no more important building in the country that has defined what the United States democracy is until this day.

Entry into Independence Hall is free, but timed tickets are required from the visitor center. Wake up early and head to the visitor center before 10 am to get your tickets, especially during summer. We went on a Sunday at 10:30 am and it was already sold out. The visitor center opens at 8:30 am and there is often a line that forms for tickets before that! 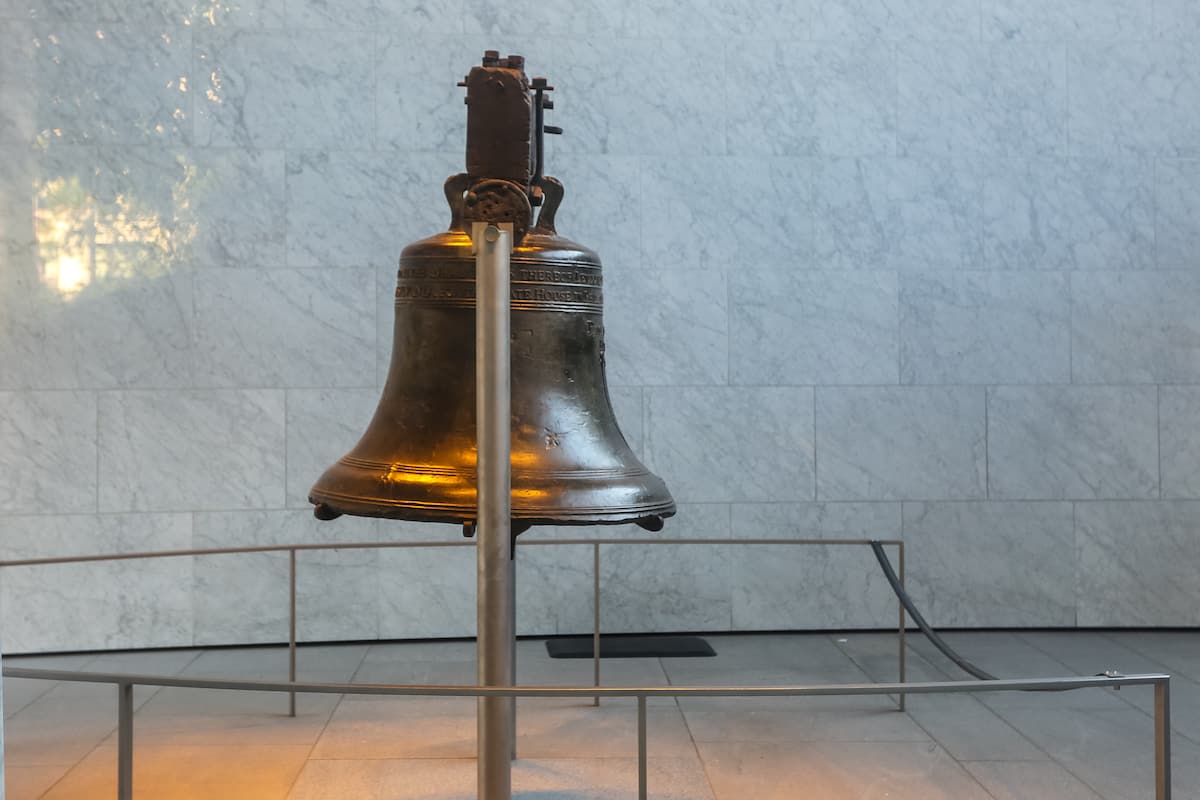 Next to the Independence Hall is the Liberty Bell Center. Get an up close view of the cracked bell that served as symbol of freedom for abolitionists and suffrage. It is a quick visit through this small visitor center.

The Liberty Bell Center is open daily from 9AM to 7PM. The line can get quite long, so if you not need to see the bell up close, stop by after hours for a view from the window!

Betsy Ross sewed together the first American Flag at the request of General George Washington. Step back into the 18th century and learn about Betsy, her life and the history of the flag through interactive programs.

Tickets cost $5 per person. Audio guides are also available for an additional $2. The house is open daily from 10AM to 5PM.

Now for the most valuable spot in Philadelphia, the United States Mint! Learn more about the history of minting money in the US from the first presses to the modern factory floor. The mint is open for free self guided tours on Monday through Saturday from 9AM to 4:30PM.

Did you know they give you a $100 in souvenir after your visit to the museum? Too bad the money is shredded.

The exhibit is open Monday through Friday from 9:30AM 4:30PM. During June, July and August it is also open on Saturdays from 9AM to 4:30PM. 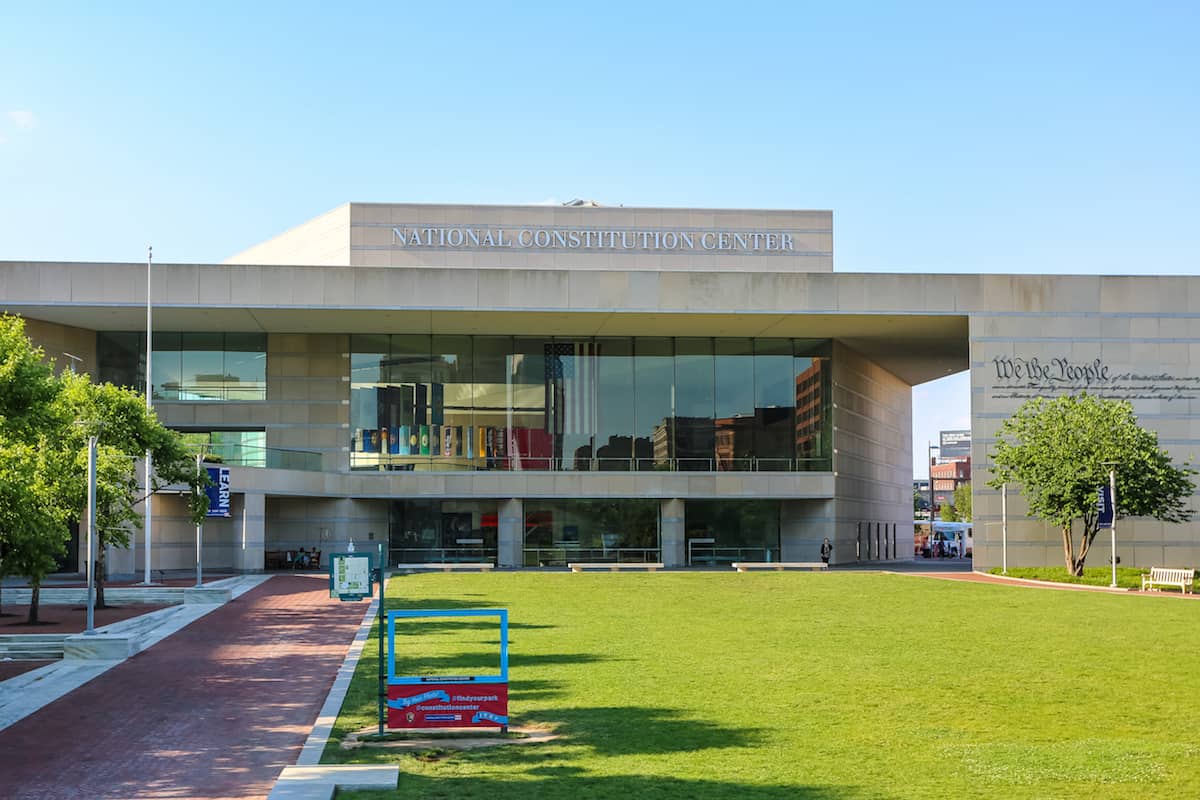 The National Constitution Center is the only museum in the country dedicated exclusively to the U.S. Constitution. It has 100 interactive and multimedia displays, photographs, films, sculpture and artifacts discussing the implications and freedoms that the constitution entitles. They also offer a theater show called The Freedom Rising.

Tickets cost $14.50 per adult for the main exhibits. The center is open Monday through Saturday from 9:30AM to 5PM and Sunday from 12PM to 5PM.

It is important to note that It does not contain the original Constitution, which is on display in the National Archives Building in Washington, D.C.

The colorful Chinatown Friendship Gate is the main entry to Philadelphia’s diverse Chinatown neighborhood. The gate was built in 1982 with tiles from the city of Tianjin to symbolize the connection as a sister city.

The market is open Monday through Saturday from 8AM to 6PM and Sunday 9AM to 5PM. It is important to note that the Pennsylvania Dutch merchants generally do not operate Sunday through Tuesday. 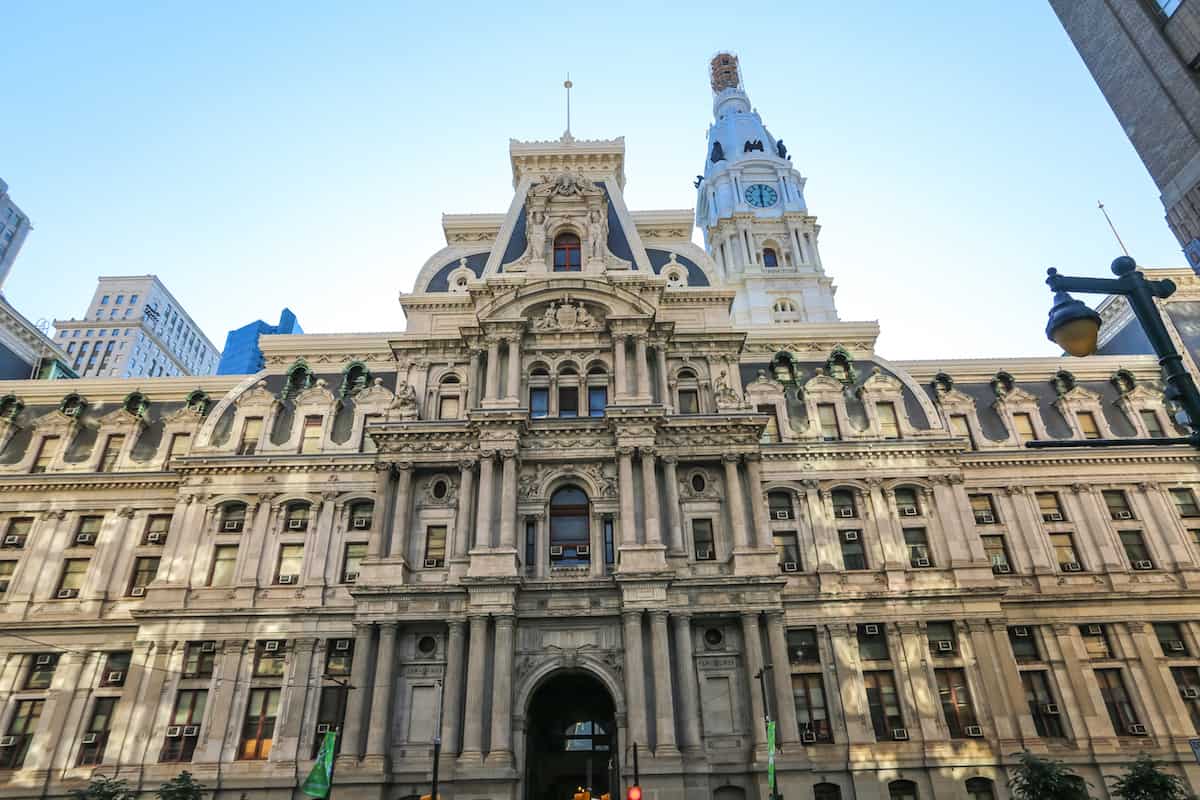 Exploring all that Philadelphia has to offer, you will pass by or through the impressive City Hall many times. This beautifully decorated building is the largest municipal in the building in the Untied States!

The observation deck is located just below the statue of William Penn, the founder of the city. From the top you get amazing panoramic views of Philadelphia along with a view of the back of the clock tower on the way up! Tickets cost $8 for adults. The tower is open Monday through Friday from 9:30AM to 4:15PM.

There is also the option for a two hour tour of the interior of City Hall ending with the tower tour. Tickets are $15 per person. The tour only happens once a day at 12:30PM Monday through Friday. http://www.visitphilly.com/history/philadelphia/city-hall/

Love Park is closed and under renovations until September 2017. The Love sculpture is also undergoing restoration offsite during that time.

Philadelphia is the city of brotherly love and that could not be taken more literally at Love Park. Actually named John F. Kennedy Plaza, it is home to the famed Robert Indiana’s LOVE sculpture. Grab your loved one and snap a photo for the whole world to see! 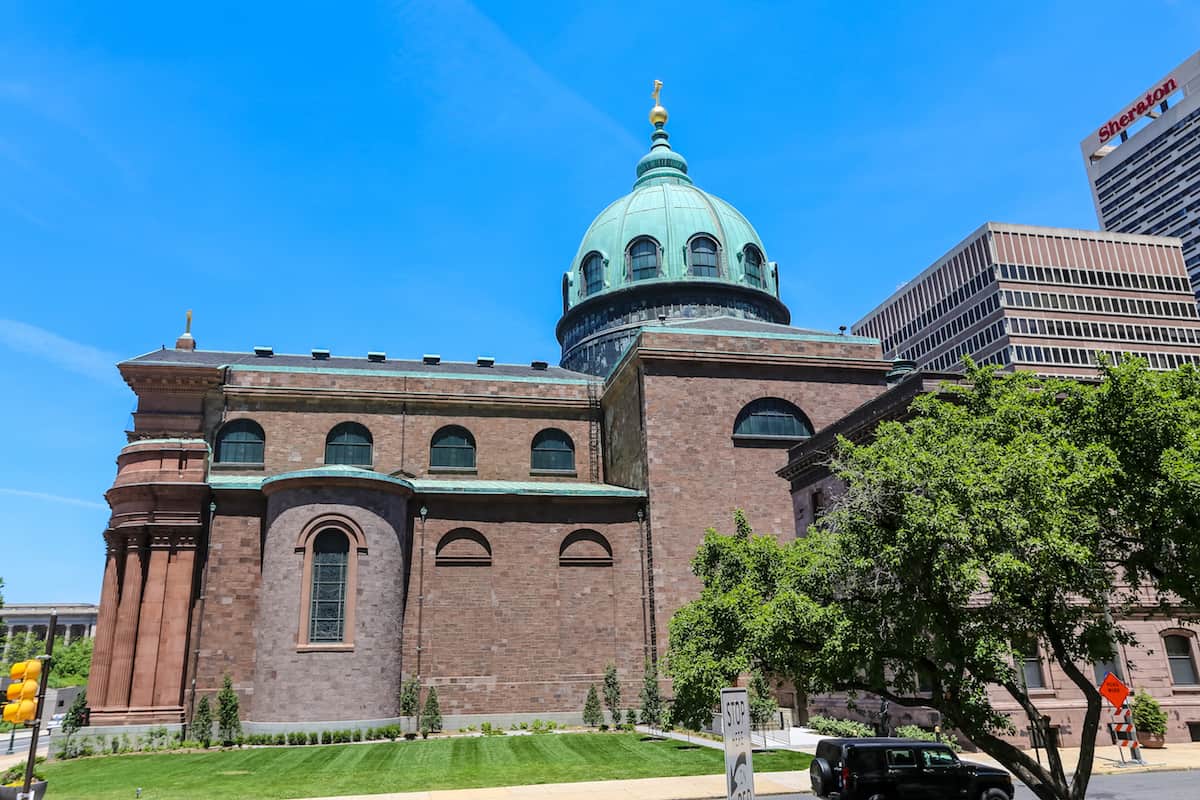 The expansive Cathedral Basilica of Saints Peter and Paul is full of beautiful religious mosaics. Step inside for a break on a warm day and enjoy the architectural wonders. 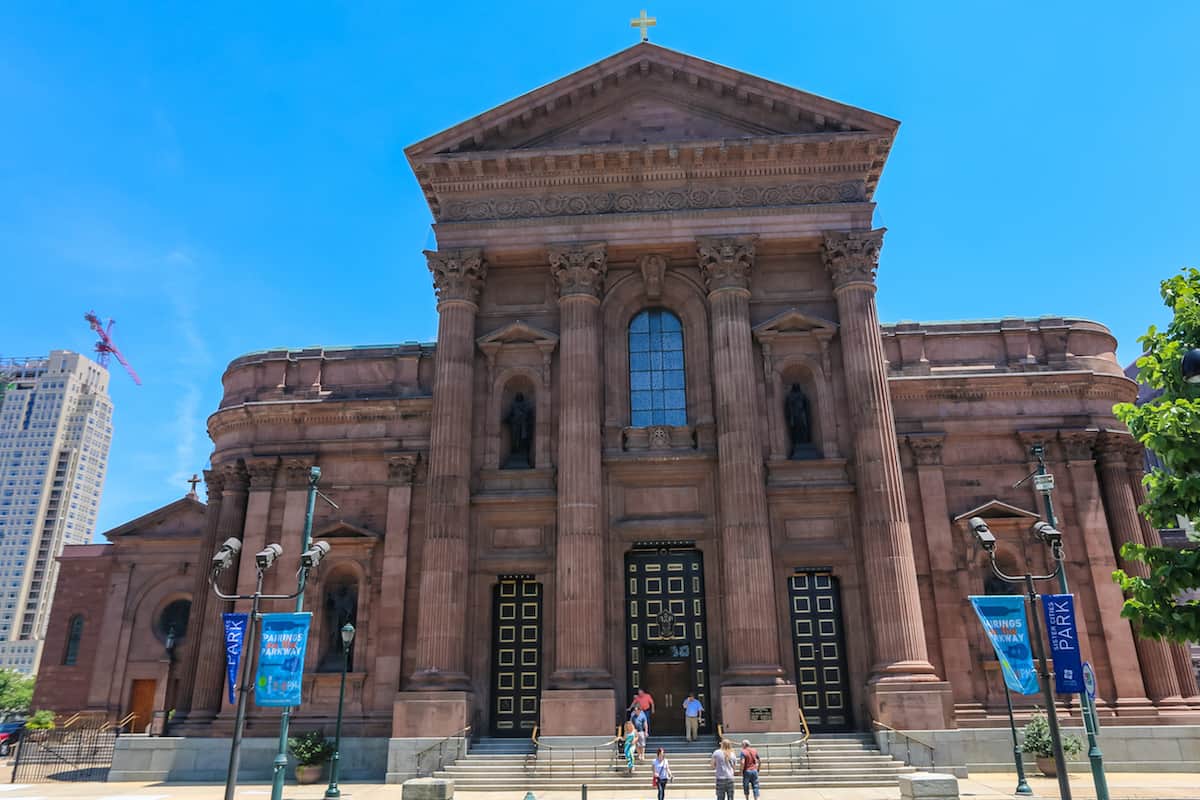 Across the street from the Cathedral is the Sisters City Park, with the AMOR sculpture.

The Barnes foundation houses a massive collection of Renoirs and Cezannes. It is also home to an impressive of African art and an eclectic mix of other items.

Tickets are $25 per person. The cool thing about the Barnes Foundation is you can also take a guided tour with information and history behind the highlights of the collection. It is really the best way to immerse yourself in the wide variety of art. Guided tours are $45 per person. The collection is open Wednesday through Monday from 10AM to 5PM. 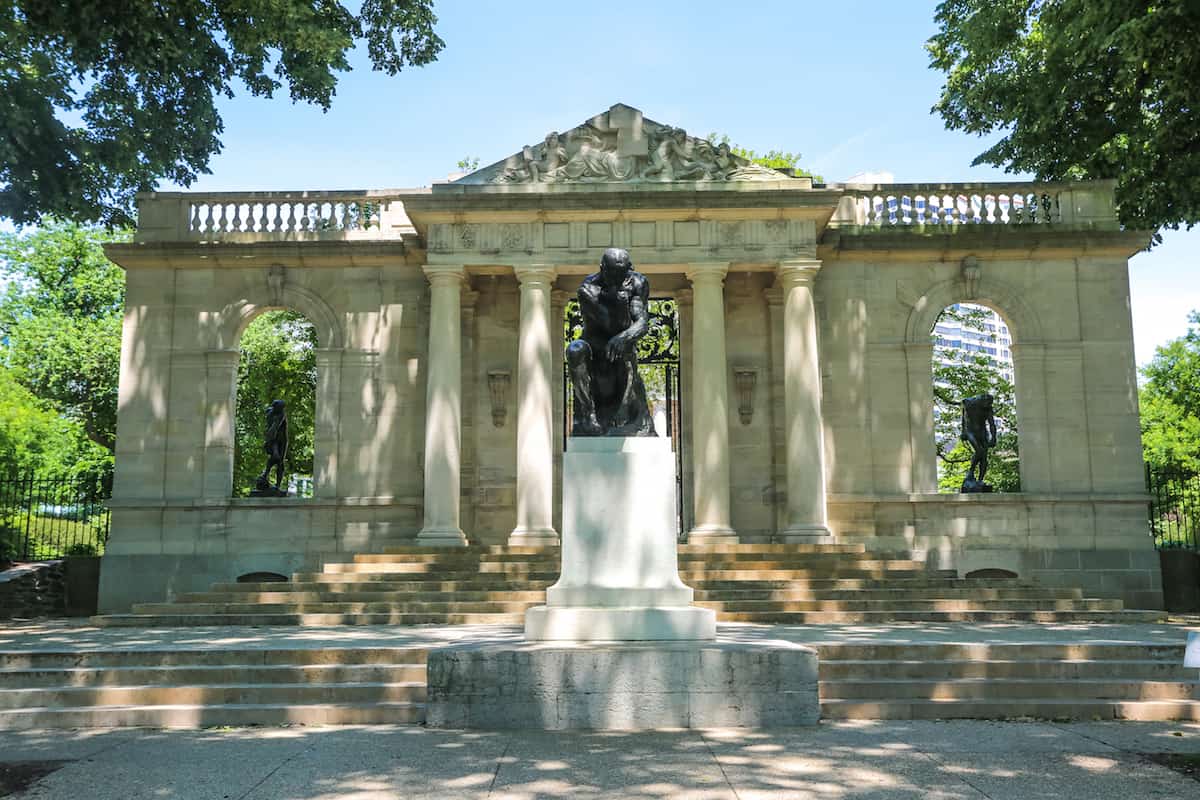 It is an interesting museum with important sculptures and drawings by Rodin. The collection includes such classics as The Thinker, The Burghers of Calais, Eternal Springtime and The Gates of Hell. The museum is pretty small but its surrounding gardens are stunning. 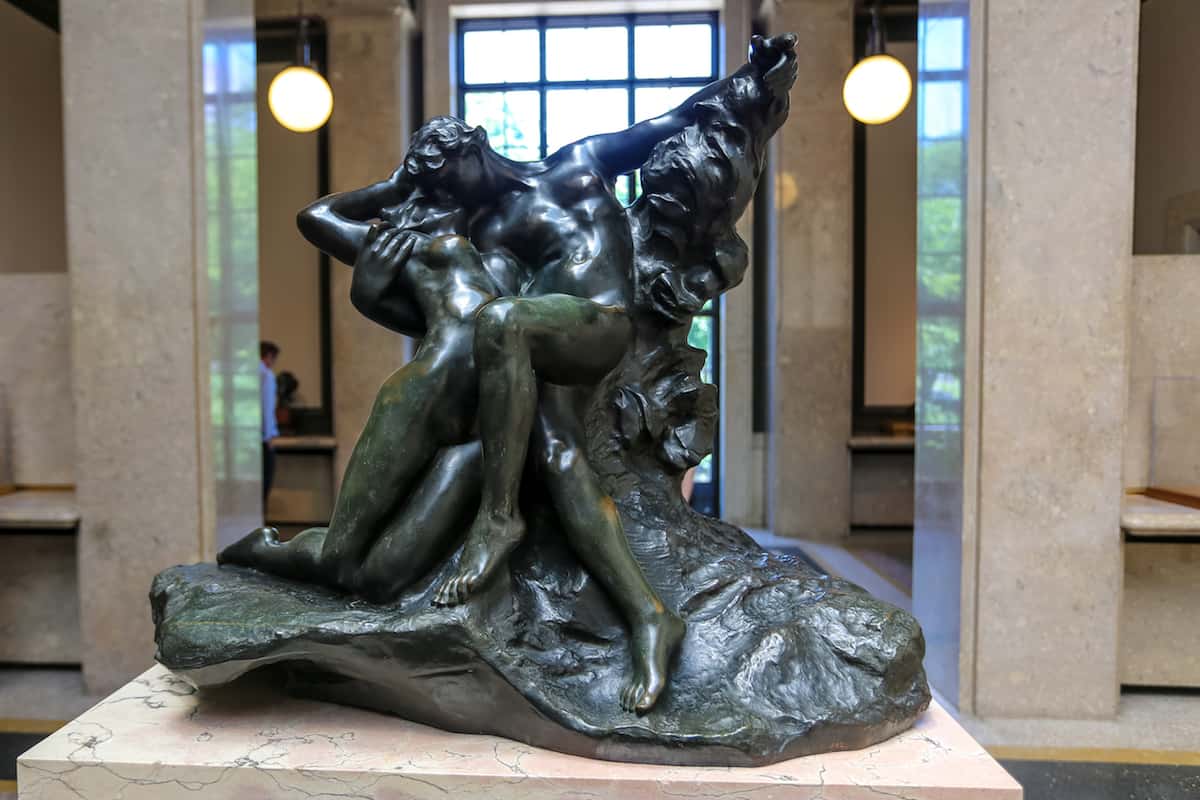 Tickets are a suggested $10 per person. Entry to the Rodin Museum is also included Philadelphia Museum of Art two day ticket.

The Mural Mile Walking Tour a nice guided tour that gives the story behind some of the 3,800 murals in Philadelphia. The tour lasts approximately 90 minutes. From April to November tours are offered Saturday and Sunday. During summer the tour is also offered on Wednesdays.

If the limited tour timing does not work for you, you can set out to explore the mural art yourself thanks to the helpful interactive map and app provided by Mural Arts. 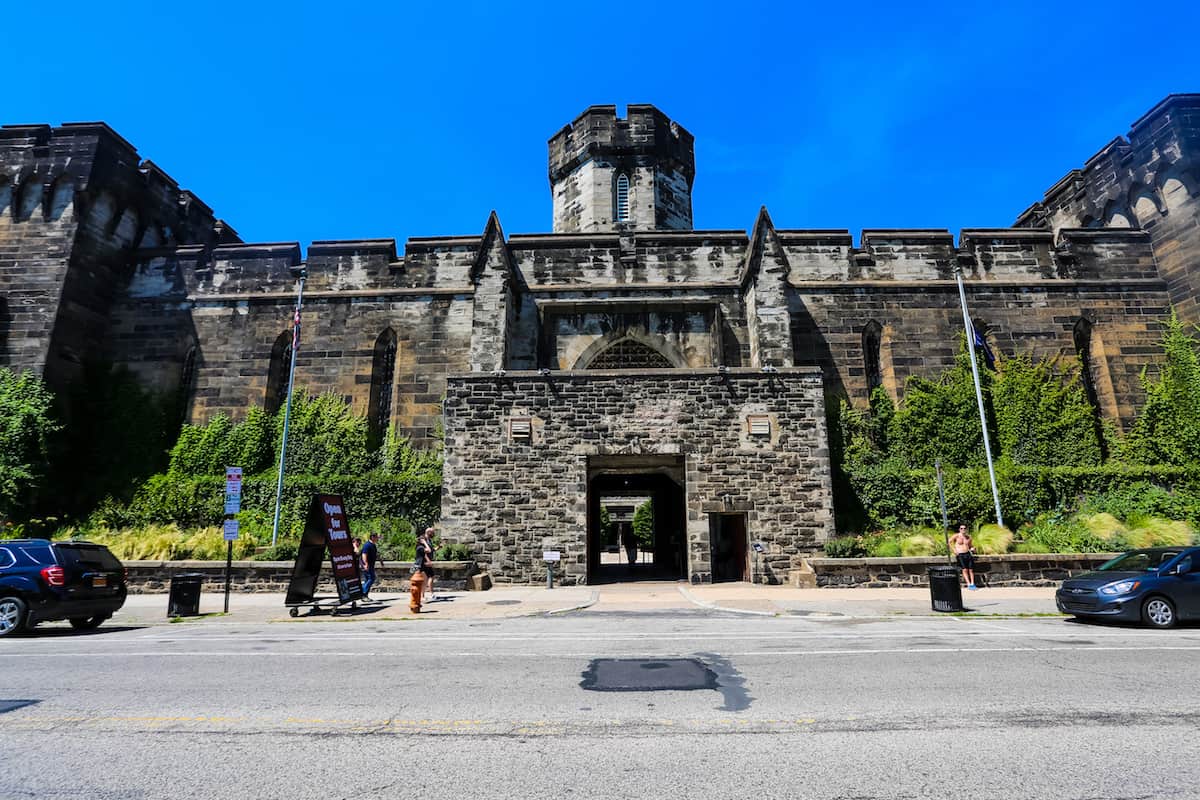 Eastern State Penitentiary is one of the most famous prisons in the world and was the largest public structure at its completion. The massive wagon wheel shaped complex quickly became a model for incarceration for hundreds of prisons around the world.

Follow the informative audio tour to visit the cellblocks, solitary punishment cells, Al Caponee’s cell, the Jewish Synagogue and even death row. There are also multiple exhibits about the life of modern prisoners and the failures of the prison system.

You can spend easily a full day if you want to learn in detail about the penitentiary and the daily life of its previous inmates. We did a quick tour through the complex and still spent nearly two hours there.

Tickets cost $14 for adults and are just $16 for a guided tour. You can also save $2 off the ticket price by getting tickets online. The prison is open daily from 10AM to 5PM.

If you happen yo be visiting Philly in the Fall, get your spooky on with Terror Behind the Walls, six separate haunted houses across the massive prison complex. Needless to say this is scare fest not for the faint at heart.

The Philadelphia Museum of Art is more than just the steps that Rocky famously ran up. It is one of the largest art museums in America with a collection of over 240,000 objects ranging from 2,000 years of artistic achievements. There is truly something for everyone in this expansive art museum, even children!

You have to take a photo with the statue of Rocky at the bottom of the steps and of course run up the upstairs in triumph as he did in the movie.

The museum is open Tuesday through Sunday 10AM to 5PM and until 8:45PM on Wednesday and Friday. Tickets cost $20 per person and are good for two consecutive days.The ticket also works for the Rodin Museum, the Perelman Building and historic house Cedar Grove. 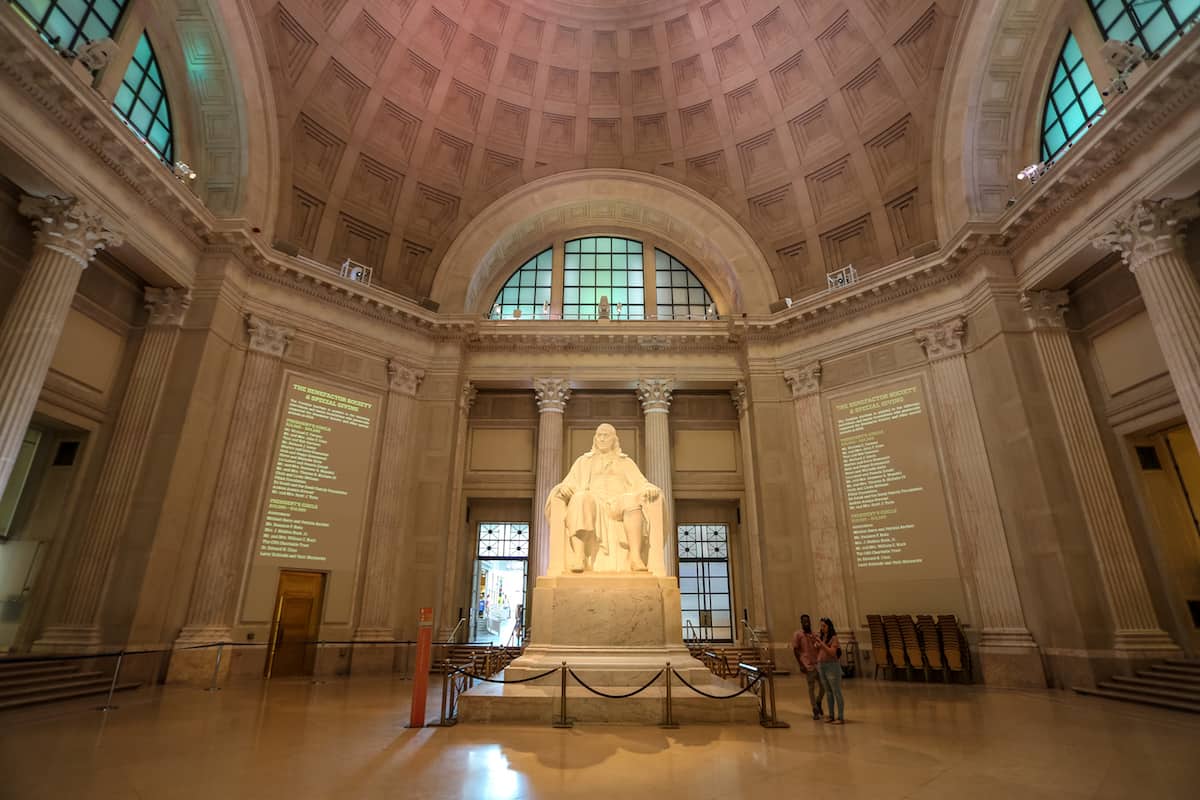 The Franklin Institute is a fun interactive science museum which is perfect for kids of all age. You can learn a lot about different branches of science such as the brain, earthquakes, the heart, physics and the sky. You can easily spend a full day of exciting learning at the Franklin Institute.

Tickets are $20/adults and $16/children. The Franklin Institute is open daily from 9:30AM to 5PM.

Looking to enjoy panoramic views over Philadelphia atop the the tallest building in the city? Of course you are! Head to the top of the One Liberty Observation Deck soaring 57 floors above the street. They offer a cool guided experience in the observation deck where the iconic sites across the city are highlighted, perfect for any out of town visitors.

Tickets are $14 per person. If you would like to enjoy a day time view and watch the sunset over Philly, they also offer a two entry ticket for $19 per person. The Observation Deck is open daily from 10 AM to 9 PM over the spring and summer, and from 10AM to 8PM during the fall and winter.

South Street once served as the southern border of Philadelphia. It has transformed into a picturesque alternative area with a diverse mix of beautiful bars, shops and delicious restaurants. It is a must when visiting Philadelphia.

While visiting South Street you have to stop by the Philadelphia’s Magic Gardens. It is not your typical garden. Artist Isahiah Zagar utilized glittering mirror, recycled dishes and beautiful tiles and folk artwork to sculpt a mosaic wonderland.

Penn’s Landing and the waterfront 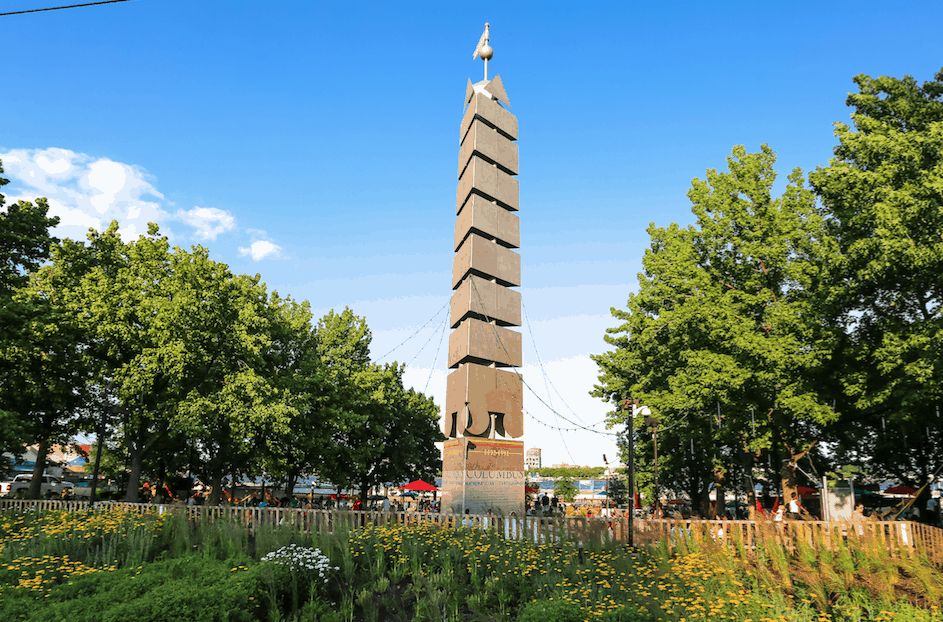 Enjoy the Delaware River which runs right along the city of Philadelphia, separating it from New Jersey. Penn’s Landing follows Columbus Boulevard along the waterfront. Besides walking along the water and enjoying several historic ships there are plenty of restaurants and vendors to grab a snack.

Head on over to Spruce Street Harbor Park for relaxing urban beach with plenty of seats and hammocks for use in the warmer months.

A great aspect of visiting Philadelphia is its proximity to other major cities like Washington, DC and New York City, and nature based getaways including the Poconos. This means there are countless day trips from Philadelphia and weekend getaways.

If you chose a nature based adventure to the Poconos Mountains or the Delaware Water Gap, leave your car behind and embark on an immersive adventure with an RV Rental Philadelphia. 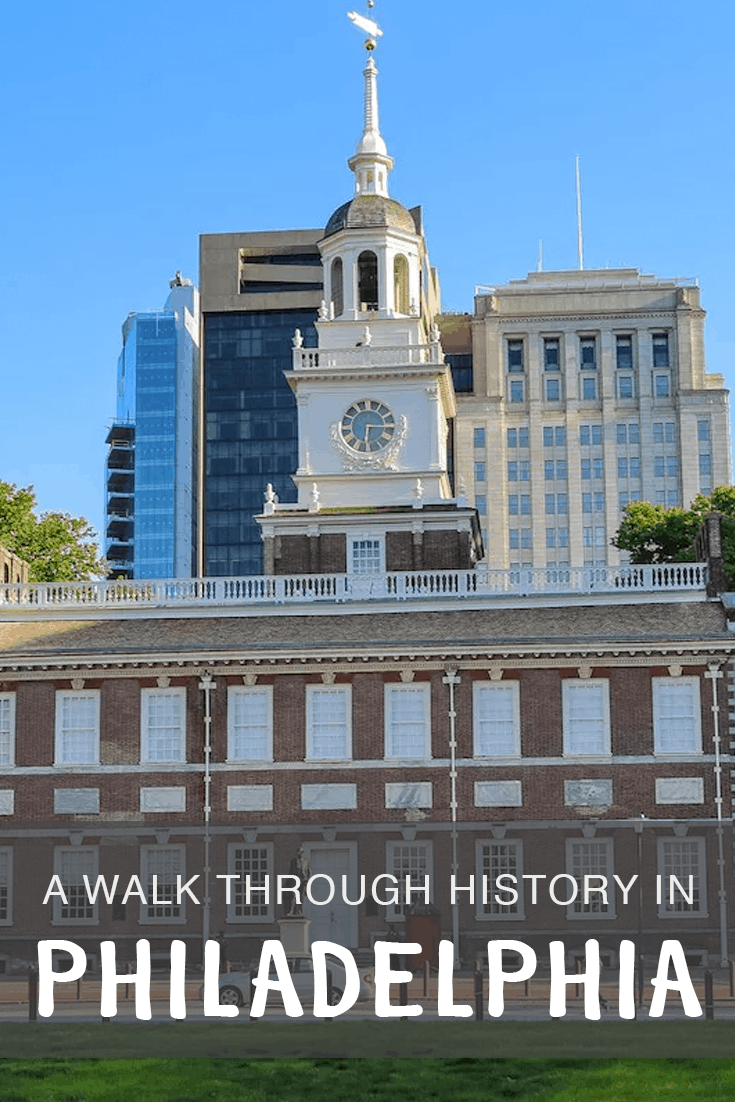 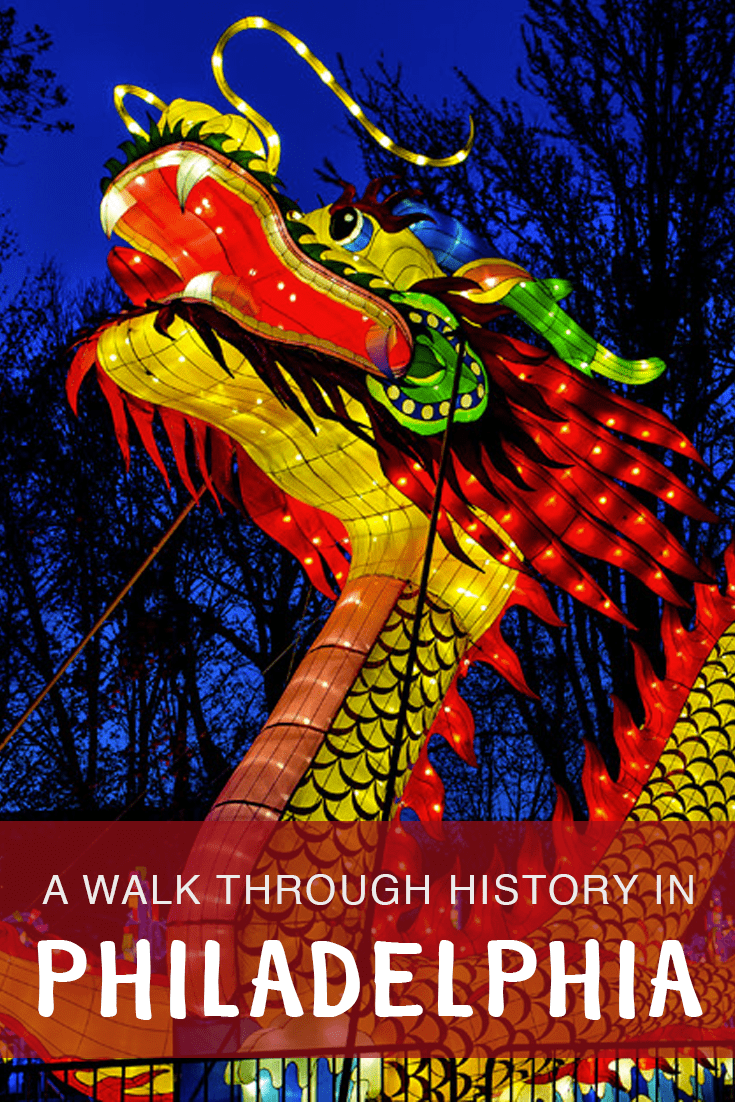 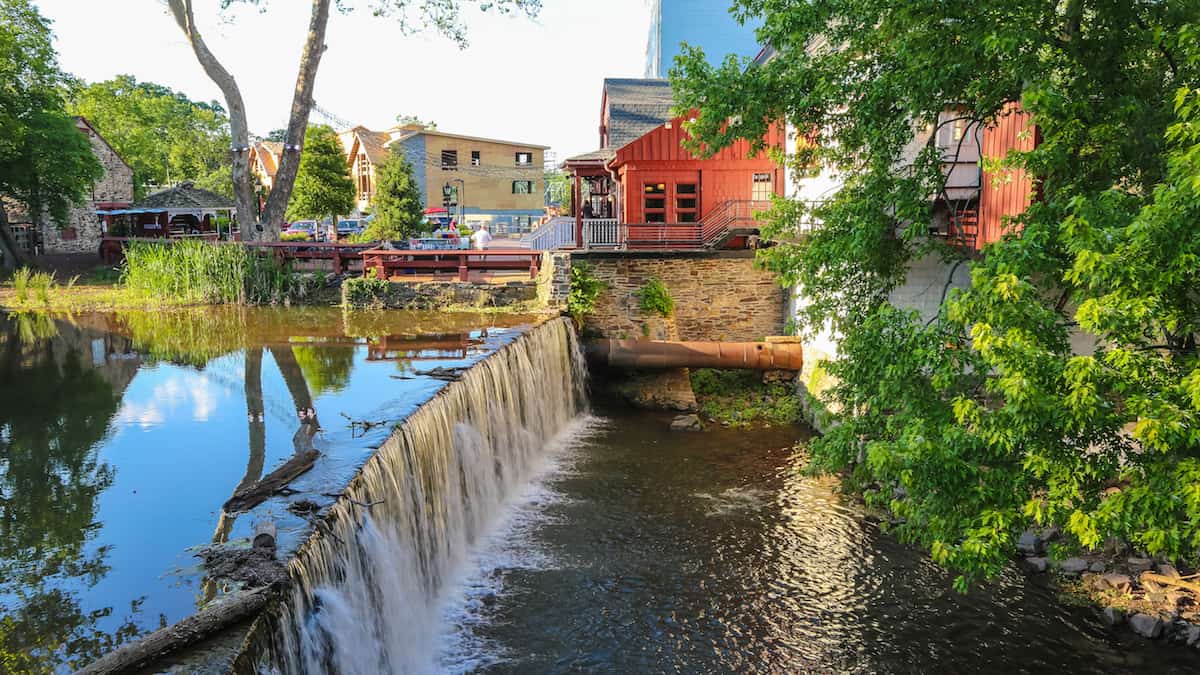 ← Previous
5 Things To Do During a Weekend Getaway in Bucks County, Pennsylvania 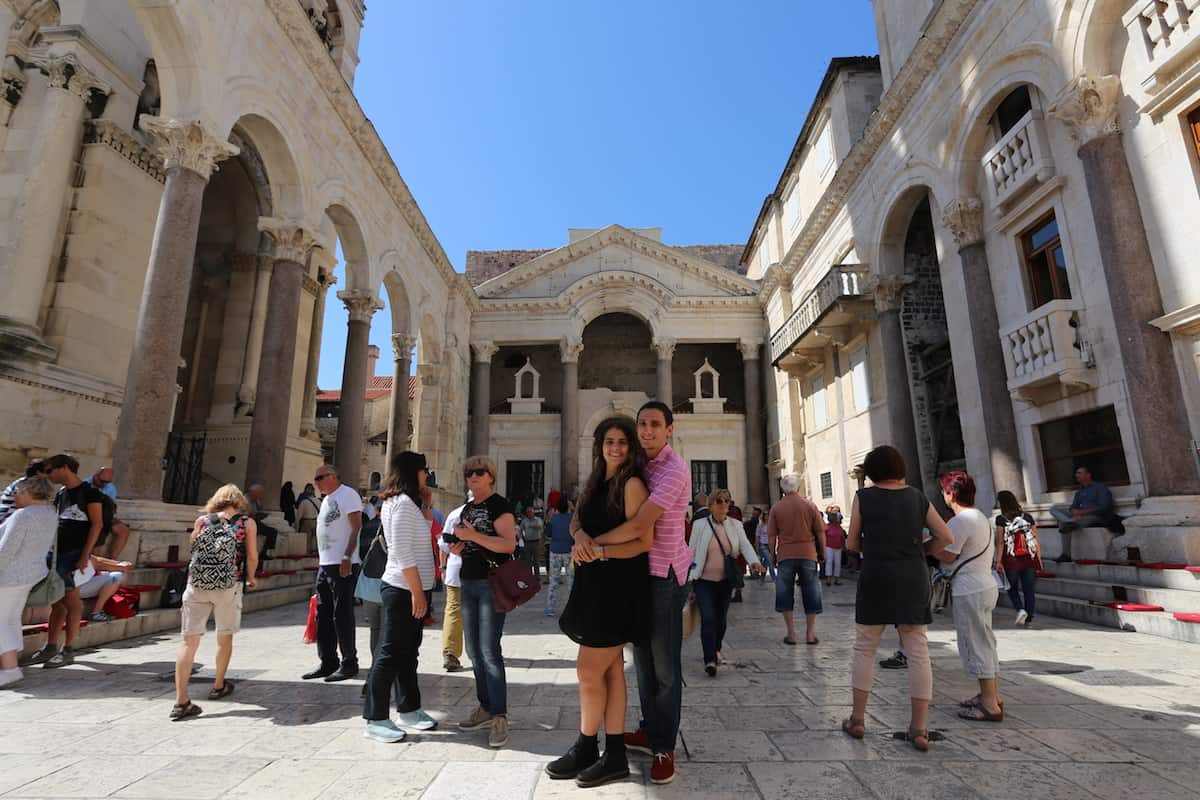 Wow! As someone who lives here, you covered a lot in just two days! Great post with lots of good information. There are also tons of things to do outside the city in the immediate suburbs. Be sure to check those out next time you visit.

So true! There is so much to explore in the area, yet there is never enough time to see it all! We absolutely have to explore outside the city more next time we visit.