Let’s start this travel guide with a side note; we have a weird relationship with Stockholm. During our first visit to Stockholm, Sweden it was favorite city in the Nordic countries until we got robbed at our hostel.

It was a traumatizing experience, as we lost our wedding rings, a month of Eurotrip photos, our written content from every city we visited and most importantly our passports with our student visas.

We were afraid of going back, not because it is an unsafe city but because it would be a reminder of one of the hardest days of our life. It might sound silly, but we had to deal with months of paperwork and lost almost $6,000 in belongings.

We did not specifically plan a return trip to Stockholm, but on a recent trip provided a layover in Stockholm and Jazmin’s mom always wanted to visit, so we made it happen!

We had only two days in Stockholm. In this practical guide you will find the best things to do in Stockholm as well as important information you need to know when planning a trip to this beautiful city in Sweden.

Stockholm is actually comprised of 14 different islands right on the Baltic Sea. The city is connected with 54 bridges and it is known to be the Venice of the North. Stockholm is a modern, beautiful and relatively expensive city.

How to get from the airport to Stockholm 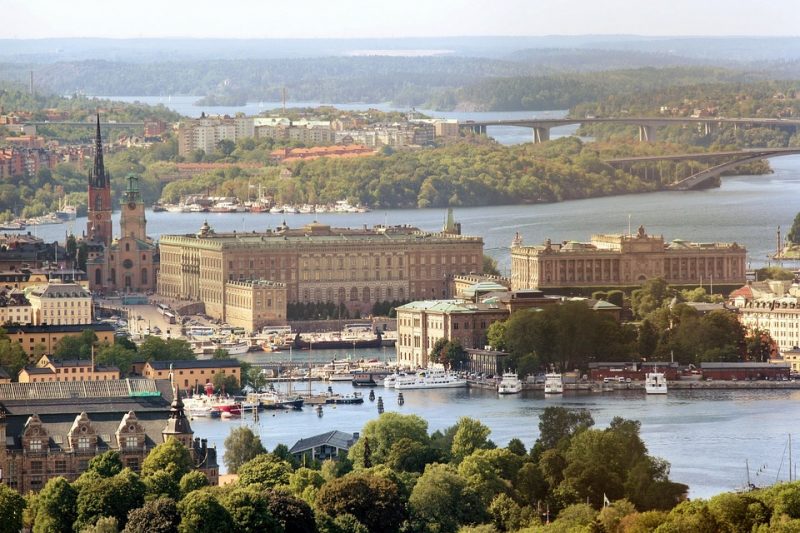 Even though Stockholm is a small city, with a little over 1 million inhabitants, it has four airports. The main airport, Arlanda (ARN) is located 40 km north of the city. The other three local airports are Bromma, which is mostly for domestic flights, along with nearby Scandinavian or Baltic countries, Skavsta Airport, which is where Ryanair and Wizz Air fly to and Västerås airport, which has routes from Ryanair to London.

If time it is not such a concern then you can take a bus and commuter train that takes 40 minutes and leaves every 30 minutes. This only costs 31 SEK.

Flygbussarna Airport Coaches is a great way to get to the city center or the airport. We took this bus and it is great. The bus has outlets and USB ports for you to charge your phone. It takes about 45 to 50 minutes to get to the central station and it leaves the airport every 10 minutes. The cheapest way to buy the ticket is through the app. We also recommend buying a round trip ticket as it will save you about 40 SEK.

Flixbus is another bus that goes to the airport 2-3 times a day. The price varies, so make sure to check before making a decision.

Avoid getting a taxi as it is the most expensive option. Taxis are not regulated in Sweden so make sure to shop around for the best price to the city center. The legal maximum someone can charge you from the airport to the city 675 SEK to one address and for up to 4 passengers.

Should I buy a Stockholm Pass?

The Stockholm Pass includes entrance to over 60 attractions, museums and tours across the city. So, it depends if you are planning on using public transportation and what museums you want to visit. We love exploring Stockholm on foot so opted not to get the transportation card, but be ready for a 14 km walking guide to Stockholm. Public transportation in Stockholm is fantastic and really easy to use.

How do I get around in Stockholm?

Walking a destination is always our first choice, but if walking long distances is not your thing or prefer saving time then you can use the bus, metro, train and even boats. If you are planning on using the bus in Stockholm keep in mind that you need to buy the tickets before boarding as they are not sold in the bus. You can purchase tickets at your hotel, hostel or even through the transit app.

What should I eat in Stockholm?

Some of the best foods in Stockholm are the kanelbullar, the Swedish version of the cinnamon bun; lingonberries; and of course the iconic Swedish meatball. Make sure to enjoy fika, the Swedish coffee break, for a moment of relaxation in the middle of the day.

What to do in Stockholm in 48 hours:

There are so many thing to do in Stockholm in 48 hours, but with just two days in Stockholm get ready for full days of exploring. Let’s start with the main attractions on day one so you get to see the best of Stockholm and come back the next day to see more of it.

Gamla Stan, the Old Town of Stockholm, is one of the largest medieval city centers left in Europe. Wander along the cobblestone streets through the colorful historic buildings.

The Royal Palace of Stockholm is not only The King’s official residence, it is also open year round for tours with an optional guide for a full history of the country and its royal past.

The City Hall of Stockholm can be explored with a guided tour, which tickets are only available day of at the ticket booth.

Strandvägen is a central waterfront boulevard in Stockholm. It is a lovely area to take a stroll and watch the boats float on by.

Visit the best Museums in Stockholm:

Stockholm has a range of museums for every type of visitor to enjoy. Since this is only a two day itinerary to Stockholm we have picked the four best museums to visit in Stockholm during your short stay.