Incredible Things To Do and See in Barcelona, Spain in 3 Days

Barcelona, Spain is full of a rich history of its people and buildings. Barcelona has been home to many notable artists, including Antoni Gaudí, Salvador Dalí, and for a few years, Pablo Picasso.

We visited Barcelona over a three day weekend, to get full advantage of the short time we had there. Over the corse of three days, we only took the metro twice and ended up walking nearly 40 miles. It is truly a walking city if you so with, but has great public transport as well.

3 Day Itinerary of things to do and see in Barcelona Travel Map:

➳ Find all: Hotels in Barcelona

At the base of Montjuïc is the Plaça d’Espanya. It is the juncture of many major roads, and now servers as a massive public square. Around the square there are many things to photograph and do.

We started our morning here, and slowly went up the mountain, to view the many options on its side.

The Font Màgica de Montjuïc was built, along with Plaça d’Espanya, for the 1929 Barcelona International Exposition. The fountain features a light, color, water and music show during the weekends.

The half an hour show will be happening from 30 October to 27 March, on Fridays and Saturdays, from 7 pm to 9 pm, starting at 7 pm, 7.30 pm, 8 pm and 8.30 pm. Make sure to check out their website for the most recent scheduling information.

The Museu Nacional d’Art de Catalunya is the national museum of Catalan visual art, displaying art covering the 17th century to today, with a collection of nearly 300,000 pieces.

It is a long walk up the stairs to the museum from the fountain, but you can resort to the always running escalator if you must.

Tickets cost €12/person, but is valid for two days. Additional tickets for the temporary exhibition are €4 and entry to a rooftop viewpoint are €2. The hours of the museum are as follows, it is open every day except Monday:

Barcelona hosted the 1992 Summer Olympics, and many of the Olympic facilities are located on the slopes of Montjuïc. The Olympic Park is home to the Olympic Stadium, the Palau Sant Jordi sports hall, the Picornell swimming pools, and the Joan Antoni Samarach Olympic and Sports Museum.

The Montjuïc Communications Tower was built to handle the influx of television coverage during the 1992 Olympics. This Olympic flame inspired tower is only a photo opportunity. From here we caught the public bus to the top of Montjuïc.

The Montjuïc Castle is at the top of the mountain, and served as a military fortress in one way or another from 1640 to 1963, when it became a military museum. Right outside of the castle is a beautiful panoramic view of Barcelona and the Mediterranean Sea. We took the public bus right to the top, but took advantage of gravity to walk down to the Columbus Column.

The castle is open with the following schedule:

Tickets are €5/person, with guided tours available in English daily at 1PM for an additional €5/person.

Day 2: The best things to do in Barcelona

This 40m tall Corinthian column is a monument to the one and only Christopher Columbus! The monument is a reminder of when Columbus reported back to Queen Isabella I and King Ferdinand V in Barcelona after visiting the new world for the first time.

We spent some time walking around the area of the column, where they have a beautiful harbor and waterfront. Our next stop was the Park Güell, which I talk about further in the Must See Gaudí Houses post. After that we walked onward to l’Hospital de la Santa Creu i Sant Pau. 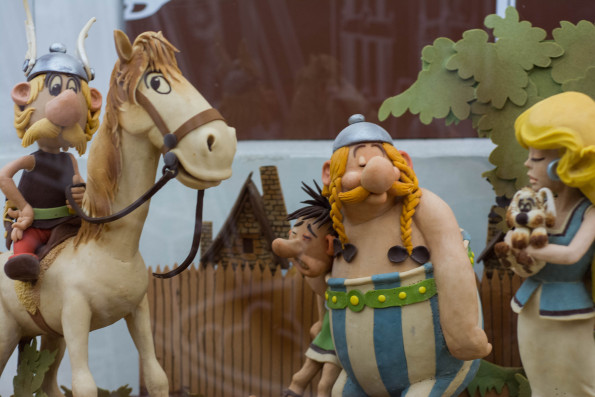 The small Museum of Chocolate provides a brief history of the cocoa bean and chocolate consumption around the world as well as in Barcelona itself. It is not much but very informative.

The reason we suggest this museum is what comes next. There are dozens of sculptures and scenes built completely out of chocolate! There are many greats: including Batman, TinTin, Smirfs and Astrix.

The Parc de la Ciutadella is a massive park near downtown Barcelona. It includes the Parliament of Catalonia, a small lake, museums, and a large fountain.

The main attraction of the park is the zoo of Barcelona. The zoo has the following hours: 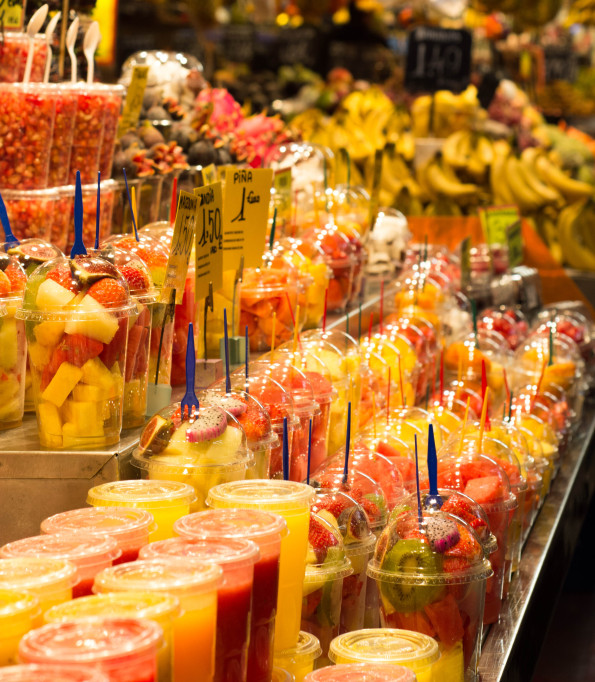 The Mercat de Sant Josep de la Boqueria is a large public market that dates back to the 1200s. The stalls mostly focus on fruits, vegetables, meat, and cheese, with a few places to grab a prepared bite to eat.

The market stalls take pride in the representation and layout of their food items. If you are looking for some beautiful food photos, you must visit la Boqueria.

The market is open Monday to Saturday from 8AM to 8PM.

The Arc de Triomf was built as the main entrance gate for the 1888 Barcelona World Fair. At its base you will see many tourists, roller-bladers, balloons and bubbles.

We visited the arc many times at different times of day, and the place was always bustling with locals and tourists alike.

The Güell Pavilions are a complex of buildings designed by Antoni Gaudí. They are the former gatehouses of the Güell Estates. It is well known for the gates themselves, including a giant mythological dragon.

The Hospital of Santa Creu and Sant Pau was missing from the travel guides we looked at before going to Barcelona, but was suggested to us by our tour guide. Now located in the same area as the major hospital by the same name. We accidentally walked around the entire hospital complex looking for the entrance to the museum.

The grounds remind you of a small city square, surrounded by many beautifully designed Art Nouveau buildings. Going through the main building, you must make sure to look up, as the ceilings are some of the best parts of the design.

Tickets to the compound and museum are €8/person, the hours of the museum are as follows:

As the sun was beginning to go down at this point in the afternoon, we decided to head onwards to an indoors attraction, so the Chocolate Museum it was!

The story of St George is that on this day he saved the princess from a dragon. When he killed the dragon, a rose came out where the blood should have been. Give roses to beautiful girls.

If they think the boy is beautiful they must give back a book, specifically a book about history, while a dictionary is the highest regarded book to receive from a woman.

If we are missing any places to visit on our Barcelona Travel Guide, please let us know in the comments.


⇟ More articles related to this:

➳ Read More: What to do and see in Segovia

← Previous
What Free Walking Tour to Take in Barcelona, Spain 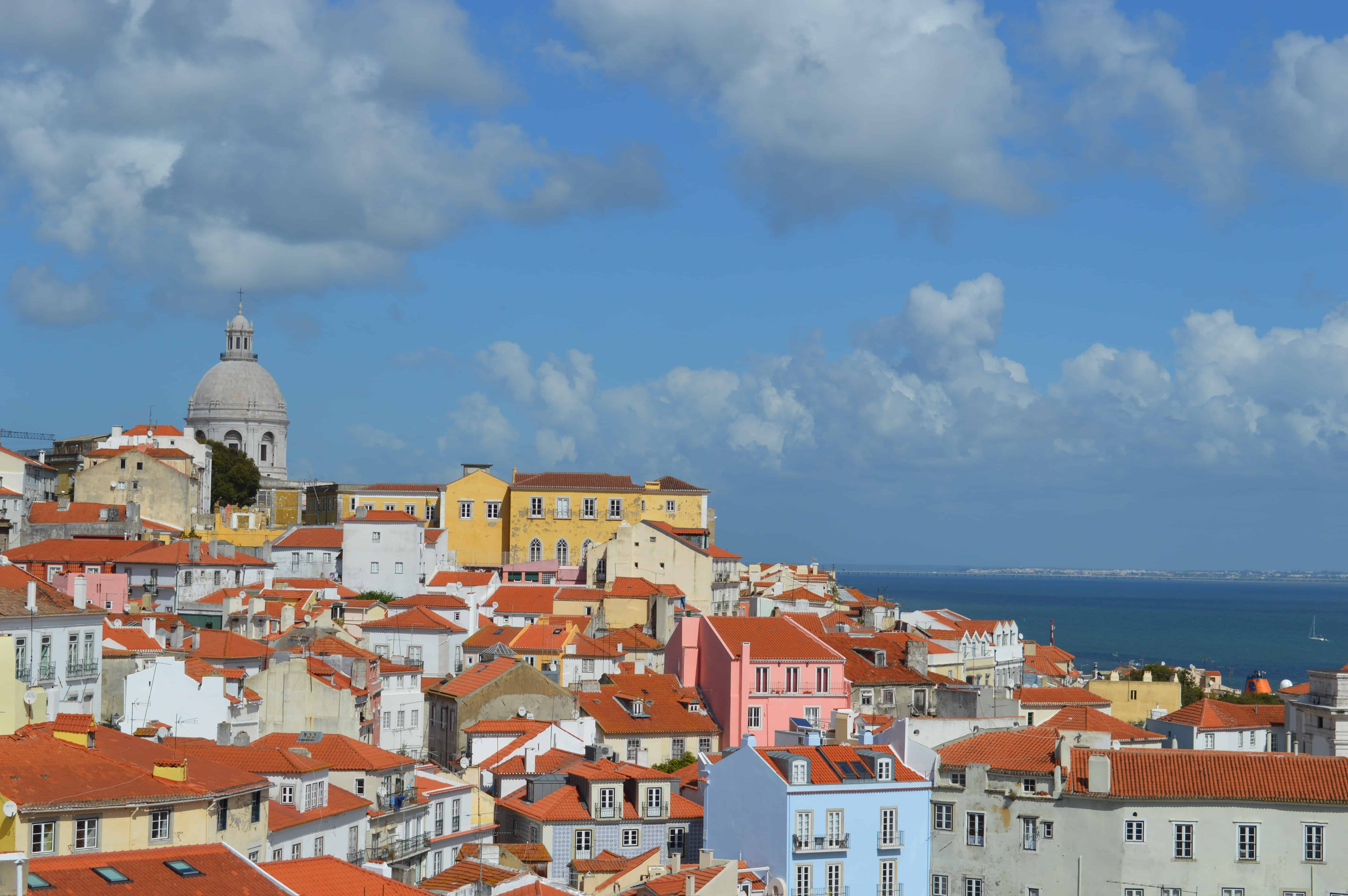 Next →
The Top Things To Do In Downtown Lisbon, Portugal
Click here to cancel reply.

thanks for sharing…nice pic with the sunset!!

Thank you so much!

Thank you for sharing! I have always wanted to travel here, and love going to the zoo. That zoo is stunning! Hope to go next summer :)

Nice guide and stunning pictures.! :) This will help us when we go to Barcelona next.

Great photos here and a nice guide! Spain is one on my lists but going there would take a lot of patience for me. Bookmarking this for that future adventure. :D

I'm heading to Barcelona for the second time this summer, and I have not hit all of these places yet so they will need to be added to my list!