We arrived in Seville, Spain at 6AM, by an overnight bus. Sunrise was not until two hours later at 8:30. Having left Madrid the night before, we were still exhausted, but luckily our hostel let us take a nap on their couch until it was light out.

➳ Find all: Hotels in Seville

The city of Seville dates back over 2,000 years, situated along the River Guadalquivir. The city fell under moorish rule for several hundred years, leaving a large impact on the architectural style in the region.

Seville, Spain is also centrally located for day trips to the cities of Cadiz and Granada, if you want to knock three cities off your list in one amazing trip.

Walking map of the best things to see in Seville:

Must things to do and see in Seville:

The gold tower is one of the most photographed and recognizable landmark in Seville. You can enjoy some amazing views from the top. Today, the old dodecagonal military watchtower, is currently a Naval Museum. You can learn for the naval history of Seville, the importance of the Guadalquivir river and the footprint of the illustrious Spanish marine history.

The is just a few blocks from the hostel we were staying in, The Sevilla Backpackers Inn. Surrounding the plaza are many of the well known buildings of Seville, including the Sevilla Cathedral, Giralda Tower, Alcázar of Seville and more!

Our first stop was the Seville Cathedral, which was originally built as a mosque. When rebuilt as church, they used the best materials they could find. It is now the largest cathedral in the world.

Buried here is Christopher Columbus, but technically not his whole body, as he was moved multiple times around the world after his death!

The Giralda Tower is the bell tower of the Seville Cathedral, but is referred to separately by locals. The tower, originally built in 1198 has been partially destroyed and built upon half a dozen times throughout its history. Make sure to visit on the hour to hear the beautiful bells chime.

Behind the Seville Cathedral is the Archivo General de Indies. It is home to over 80 million pages about the Americas on over nine kilometers of shelving.

There is a large exhibition space, open to the general public with the following hours: Monday to Saturday, 9:30AM to 5:00PM, and Sundays and public holidays from 10AM to 2PM. Be aware that the content is all in Spanish.

It is one of the best examples of Mudéjar architecture in the Iberian Peninsula. It is the oldest palace in the world still occupied by a monarchy. The entry line can get long, but is shorter during lunch, if you arrive around 2PM.

Ticket prices depend on the time of your visit and how much you want to see. Check their website for complete information.

Our next stop was the Plaza de San Francisco, right behind city hall. It was partially under construction at the time of our visit, so was full of fences, but it does have a beautiful carrousel from 1900.

The large city hall of Sevilla has a beautiful facade both front and back. Either side of has been designed in two different styles. The front side is built in the Renaissance style covered by intricate decorations including mythical and historical figures. The back side of the building is built in less ornate Neoclassical style.

We visited Sevilla right before Christmas, so there was a huge tree and manger, along with a military concert.

Plaza Nueva is located on the front side of the Seville city hall. In the center of the square is a statue of King Ferdinand III of Castile. The square is lined with orange trees and surrounded by book kiosks, where you can find anything from classic texts to comic books, mostly in Spanish.

Just a block away is the Iglesia del Salvador. This grand baroque church is very beautiful inside and out. The surrounding square has some nice tourist cafes to sit, get a drink and enjoy the sun.

Entrance to the church is included in the ticket for the Cathedral, or is €4 on its own.

We than walked to the Palace of the Countess of Lebrija, which is known for its Roman mosaics which pave most of the first floor. The museum opened up in 1999 to give the public to opportunity to explore the great archaeological collection amassed by the Countess.

It does not look like much from the outside, but you will be amazed when you head inside.

Tickets are €5/person or €8 with tour guide. The hours are as follows:

A ten minute walk from the Palace, is the Casa de Pilatos, the permanent residence of the Dukes of Medinaceli. This beautiful Renaissance style home gives you a rich view into this architectural form.

The house is open daily from 9AM to 6PM. Tickets cost €6-8 depending on how many floors you want to see.

We then walked to the hardest place for us to find in Seville, the Hospital de los Venerables. It is a beautifully designed church and serves as the home to the Velázquez Center, with an art gallery.

If you can not find the entrance based on your map, you might need to walk a full circle around the block to find it! 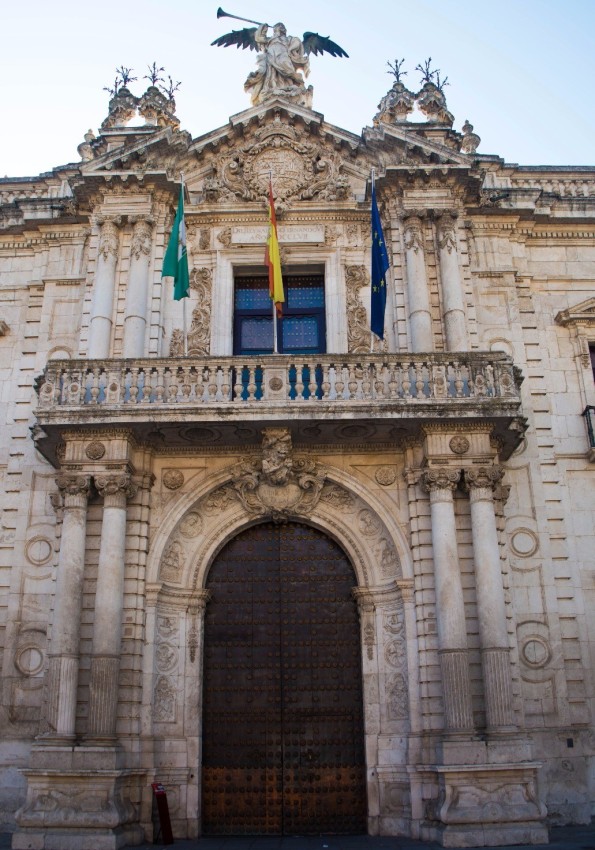 Our next stop was the Royal Tobacco Factory. The factory was completed in 1771 and quickly became the largest tobacco factory in Europe, providing nearly 75% of all cigars to the continent. It was so valuable that it has its own moat.

The massive building has its own jail and church. Don’t miss all the sides of this historical and beautiful building.

After many years of decline, in 1950 tobacco operations were moved. The building now serves as the seat of the University of Seville.

The Costurero de la Reina is a historical guard house built on the corner of María Luisa Park. Built in the shape of a small hexagonal castle, it creates a picturesque area, at the edge of both the park and theRiver Guadalquivir. 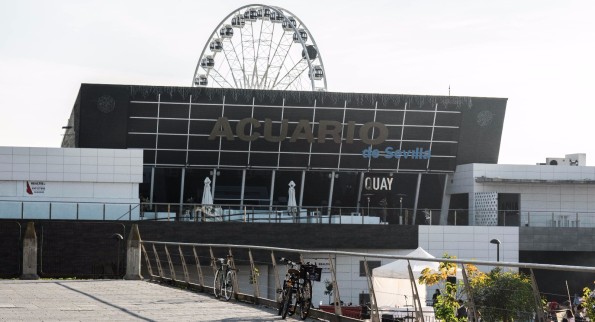 Across the street from María Luisa Park is the Muelle de las Delicias.  It is a walkway and park along the river. When we visited the port it happened to be the weekend of the Callejeando FOOD FEST, a food truck festival. Check back soon for our post about the food fest!

Also, in 2014 the brand new Sevilla Aquarium opened up at the end of the plaza.

Tickets are €7.50/adults and €5.5o/students and children. The wheel is open daily, but its hours depend on the month, so make sure to check out their hours online.

Walking back north to downtown Seville, we walked through the Parque de Maria Luisa and past the archeological museum.

In the park there is so much for everyone. There are many different small areas with fountains and buildings and flowers. There is even a gazebo on a small hill, for a romantic moment. If you have the time, you can spend an entire day enjoying the park. Just bring a picnic lunch and some wine for a sun soaked day.

Saving the best for last, we visited the Plaza de España. This huge plaza was built as the showcase for the Ibero-American Exposition of 1929. Around the base of the plaza are the tiled ‘Alcoves of the Provinces,’ a little mosaic for each province of Spain.

There is also a small canal going around the plaza, where you can rent a row boat.

You also might recognize it as the City of Theed on the Planet Naboo for all you Star Wars fans out there.

Where to stay in Seville:

The Sevilla Backpackers Inn is relatively cheap accommodations for the city.

We booked two beds together online, but when we arrived at the hostel, it turns out the booking did not go through correctly. We had two beds, but in separate rooms. Not only were they in separate rooms, but I was in the annex across the street. It appears it was a mistake, and they offered us a discount in return.

The hostel offers an exciting Arabic event each week, with arabic dancing, lessons and tea!

The hostel has two other hostels, in Granada and Cadiz, and offer a 10% discount if you pick up a card at one of their hostels. They also have an interesting deal, that if you stay at all three hostels, and get a card stamped, you get a free night at any of the hostels!

⇟ More articles from Spain that might interest you:

➳ Read More: What to do and see in Segovia

Things to do in Seville, Spain - Travel To Blan...

Great read we are headed to Seville in November i cant wait. So many sights to see looks amazing

Yes, it is truly an amazing city.

Beautiful! I would love to visit Spain. If I ever get the chance, this will come in handy:)

Hi, nice post. Makes me want to visit Seville too. I hope to get an opportunity to go to Europe and Spain is one of the must visit places. With your post, Seville should be a part of the itinerary, besides Madrid.

Wow Spain has been on my mind for a while now, hopefully it will call me soon. Your article is a beautiful guide to the the three beautiful cities. And it is informative, I had no clue that Christopher Columbus had been travelling sans his passing away too